Death Bug AKA: How I Almost Died Last Night

So last night I had something terrifying happen. Not like Surrounded by Zombies and Stupid People Scary (a la Walking Dead), but Giant Bug is Going to Kill Me in My Sleep Scary.

This evening, I tried to kill a GIANT bug with a Kleenex Box. I thought that I got it, but it fell from the wall to Brian’s computer…so I tried to get it off…But then it disappeared. I found it on the floor, and thought…I will wait until Brian gets home to dispose of it.

I went back to making chili.

I came back 10 minutes later and it was gone. I thought to myself, Chrissy…that evil bug is going to hunt you down in your sleep. 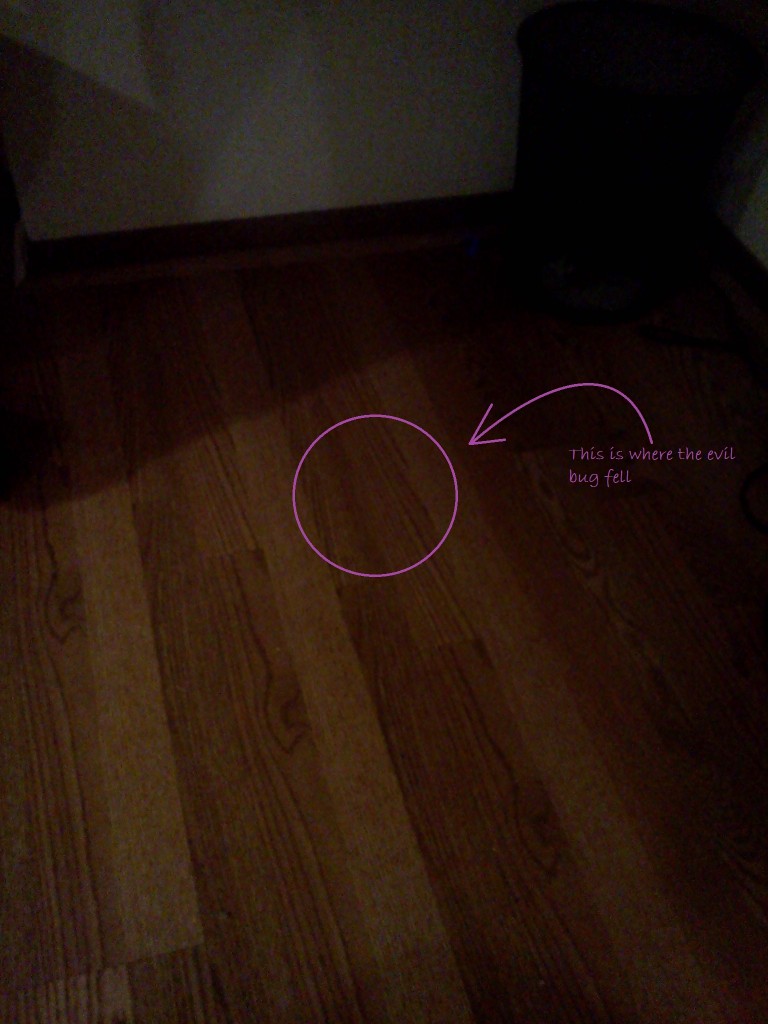 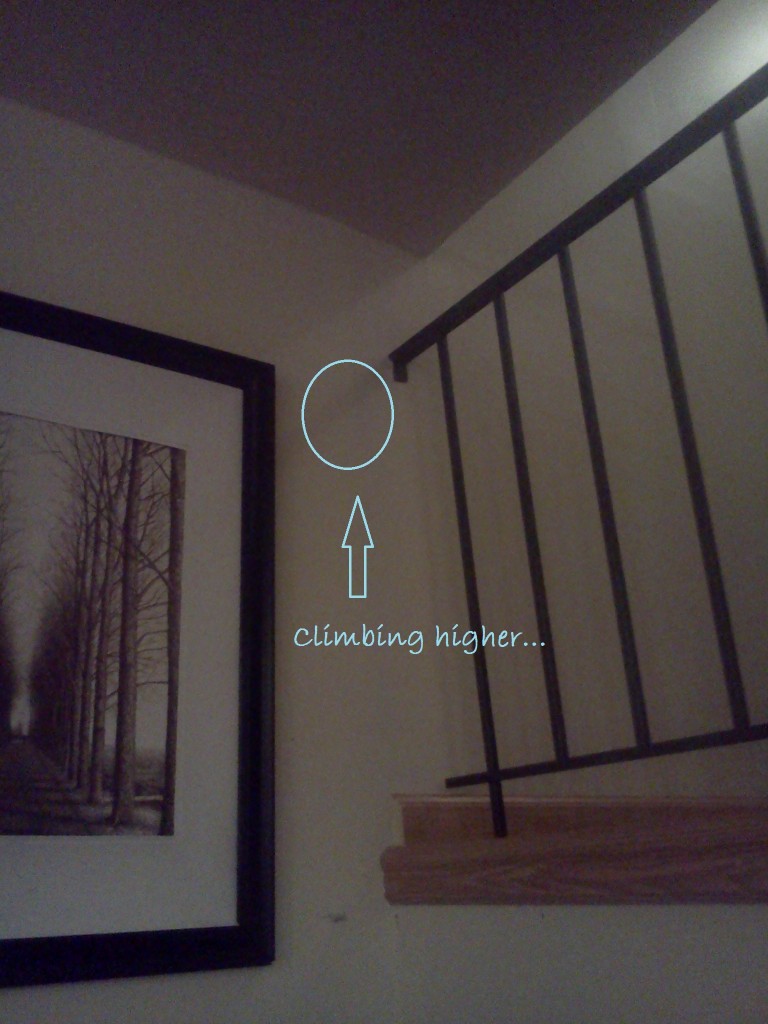 Apparently I did not so much as injure this evil beast and I was not going to risk my life to try killing it, again. But I was definitely going to keep an eye on it. About 20 minutes later, I noted that it was WAY high up in the stairwell wall… 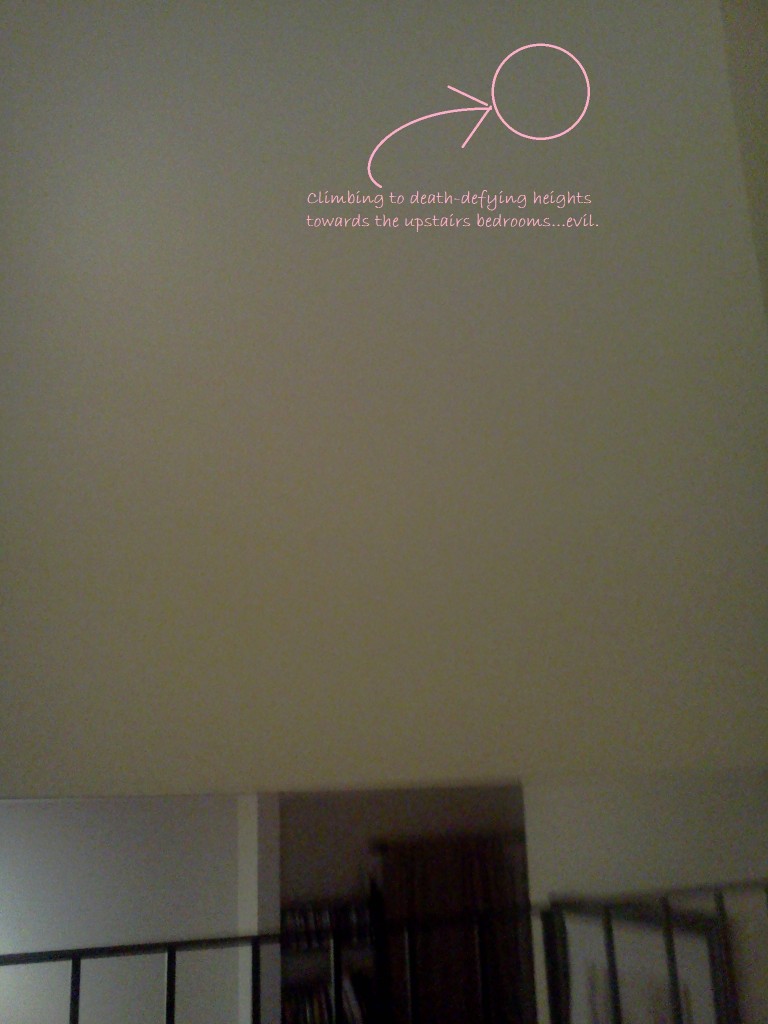 At this point, I was freaked out. This beast really was headed for my bed. I hope Brian gets home soon…

So I went back to the chili… and decided that I was going to take pictures of this bug… which is how I ended up with the empty stairwell wall (the first pic I took, of course).

And it was gone! I looked around, and just to my right…on the stairs was this evil bug staring at me.

I went back to Twitter and Facebook and Blog…and continued to watch Death Bug attempt to climb the stair ledge. After 20 minutes of this, I went back to the kitchen to check on chili…I came back…and again, Death Bug was gone.

So I scrambled up to my room, careful not to get near Death Bug. Searching. Not in the bathroom. Not in my room.

I should have killed it when I had the chance… it’s probably better this way…if you can’t find him, you won’t kill him. You don’t need another insecticide on your hands, Christine.

Not in the hall. Not on the wall…

Oh Crap. What if Death Bug is under my bed already? I’m going to die. Death Bug is going to crawl up my nose and eat my brains like a zombie bug.

I continued my search for Death Bug throughout the house.

What if Death Bug wants to contaminate the chili!??!

And so I ran to the kitchen, and there was Death Bug…racing toward my chili. Well, I certainly couldn’t let Death Bug poison my chili… especially after last time–when I went to go buy pazcki on Paczki Day and accidentally left the chili to burn in the 40 minutes it took me to buy Polish donuts…Burnt chili is not delicious. And it was a HUGE batch. Anyways…

So, with Death Bug being on the floor, I took the opportunity to throw on some shoes and smash the little bugger to smithereens. So much for not killing it.

Update: That night, Brian got home late. Like 1 AM late. So it’s a good thing that I took matters into my own hands and killed death bug. Or. So. I. Thought.

At about 3 AM, Brian woke up and panicked majorly…He saw something hovering/crawling/flying above him. A huge bug. I sat up and reached for him, thinking he was sleeping…and he yelled, “No! Don’t move; it’s right there!”

Apparently, death bug was, in fact, trying to kill us in our sleep. And I had only killed one of an army of death bugs. The next morning? One right outside the garage. Death bug. Evil death bug.

What buggy experiences have you had lately? Anything tried to kill you in your sleep?