For the love of the game: A born fanatic

(Preface: If you’re not into Jesus or politics, keep reading–I promise I have a point)

I was *NOT* born to be a religious fanatic

My parents instilled a strong belief in God, but more importantly, they allowed me to believe (as I did and do) that good people who lead strong, genuine, and caring lives will be rewarded, regardless of their faith. While I believe that there is a God (and a forgiving, loving God, at that), it is not my place to push Him on others. It is not my place to HATE others for believing in something different than what I believe.

As a child, I had heard in various adult conversations that only Catholics shall go to Heaven. But as many children, I questioned in honor of my pals. But what about my friends who aren’t Catholic? I thought to myself, that if they are good people, they will be okay. You know why? BECAUSE GOD LOVES US. /end Jesus talk.

I was *NOT* born to be a political fanatic

I have tendencies for both sides of the main court. I suppose that makes me an independent. I was educated by my parents to watch, listen, and learn, but also to see what was going on behind the scenes. It is my duty as a voting citizen to do my own research.

Whether or not someone says one thing, they may very well do another. To be the most informed voter that I can be, and remain as unbiased as I can be, is the only way that I know to do my part. I truly believe that in our current society that I am more often than not voting for the lesser of two evils, and not for the better leader.

I was, on the other hand, born to be a sports fanatic

You think I’m making this shit up, but I’m not. At all. I come from a family of sports-crazed chicks. My grandmother (Dad’s mom, one of my namesakes, who I never had the joy of meeting) Regina (Jean) jumped on the White Sox bus with a ball and made every player on the bus sign the ball before she got off. What a spitfire!

My mom, a die-hard, White Sox loving, Bears loving lady, has a list a mile long of her exploits in the sports world. From kissing baseball players to stalking football players, my mom’s done it.

In fact, when I asked her for her wild sports stories, she e-mailed me this (I literally cut and pasted for entertainment value–OK with a few modifications…my mom has little regard for typing quotations and doesn’t quite get the difference between all caps and normal type–sorry Mom! I love you! Really folks, Mom’s got impeccable grammar–she’s defo one of the reasons I’m such a grammar Nazi… it’s just the typing thing):

#54 Tom Hicks Bears…1980…I was working at the phone company, and answered the phone,
“This is Miss Nudd, how can I help you?”
The man on the phone says to me, “Hi Patti, this is Tom Hicks”
I almost died and had to put him on hold and said, “Tom Hicks knows my first name!” He had gone to the same high school as me, and knew my sister; I knew his little brother.
Scott Fletcher White Sox Winning ugly playoff team 1983…Working at phone company again…
“This is Mrs. Woj, how can I help you?”
“I’d like to install a new phone.”
“Ok..what is you name”
“Scott Flectcher”
“Uhmmm Scott, you play baseball?”
“Yea..you a fan?”
“Oh boy! Am I?!…I stayed out all night pregnant* for playoff tickets.”
I then proceeded to install his phone.

*For the record, friends, she was preggo with yours truly.

White Sox 1988?…White Sox playing Yankees. Dad and I were waiting after game near the Sox player parking lot…I saw George Steinbrenner (Owner of the Yankees.) About 15 people were standing with us…I yelled
“Mr. Steinbrenner!”
He walked over and talked baseball and signed autographs for 10 minutes..great guy..bad reputation.
Derek Jeter: Another Yankee…Great rep…bad guy
Dad and I were on the field after winning a contest with Old Kent Bank. It was Derek Jeter’s birthday.
He walks by I say” Hey Jeter…Happy Birthday”…he gave a me a nasty glare and without a word, walked away.
many more will continue in an hour or so.

Mom never finished, but I figure that’s plenty of tales, considering the list goes on and on and on… so you can see why I feel it is absolutely necessary to continue the tradition of training die-hard sports fans… I give you exhibits A: my niece, Princess B.

My only claims to fame (other than the childhood encounters that my parents got us into because they owned a bar-and I have pictures of me with a bunch of White Sox greats whilst wearing a New Kids on the Block tee-shirt) are a couple of slightly embarrassing encounters and one awesome wave. (I’m really good at being embarrassing whilst fangirling — please see exhibits Jenny Lawson and Cary Elwes for proof). Getting hammered with my pal Marissa behind home base (in Scout Seating), I yelled over to Ozzie Guillen, “Hey Ozzie!” waving frantically in order to grab his attention. Drunk Chrissy was convinced that mom would have done the same thing. Of course, we were losing at the time, and he looked at me, annoyed, and gave a little half wave back. 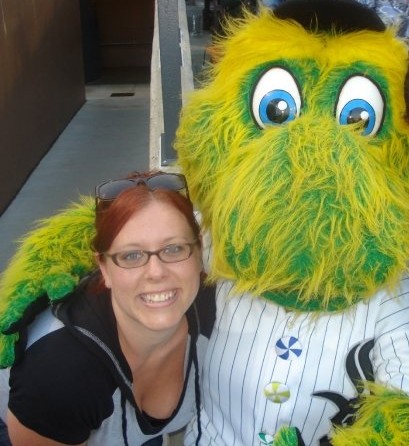 Then there was my first Bear. To this date, I have only met one Bear. The newish punter, Adam Podlesh, was at the Chicago Auto Show in February, and I was determined to meet him. Cletus and I had planned a lovely afternoon downtown to check out the zoom zooms and more. Podlesh was at the Toyota display taking pictures and signing autographs. I walked up there with my picture to sign and Cletus with the camera ready…and the only language my brain could muster was a dulled, awkward, starry-eyed “hiiiii.” He looked at me a little funny and asked if I wanted to take a picture first or sign an autograph first. “um…sure” I said. Wow, quite the verbal mastermind, I was that day…So we took the picture. It was awesome. Then he asked if he should sign the autograph to someone, I said, “Um to um Chrissy. awkward pause Um. That’s me. awkward smile” He smiled at me like I was a little goofy, but hopefully endearing… “Thanks, uh duh grin,” I told him. Then I asked if I could hug him. And he said it was okay. So I hugged a football player. I like to think that I made his day by being a crazed and dazed fan… 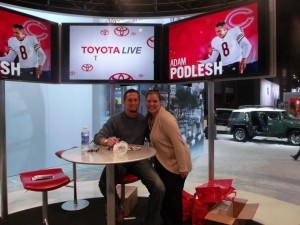 But the best time was when I was at training camp in Bourbonnais, and Robbie Gould waved at me. No, seriously, he waved at me. I yelled out, “Hey Robbie!” and I was planning to snap a picture. When I clicked the snap button, I quickly realized that WHAM! I was videotaping it! (Of course, finding that video now seems to be near impossible. BUT IT HAPPENED.