No seriously. I was.

I’ll bet you joined Pinterest just before Christmas…Maybe you joined in January, after the holiday excitement settled down. Or maybe you just started pinning about 3-4 months ago. But not me.

I joined when the only friend I had on there was the friend that recommended I check it out. (Thanks, Molly!) Then I made Penny get on it. But there we were on it before it was big. Before it was crazy. Before it was cool.

This is my Pinniversary, so I thought that I would share my favorite things that came from Pinterest. I used Pinterest for Halloween last year. It was perfect!

In order to find the perfect Halloween costume, I pinned everything I could. I’m of the making-your-own-costume-is-better school of thought, but my version of making is scissors and hot glue. I don’t sew. Not my style. So Poison Ivy was my plan…

This is what I came up with: 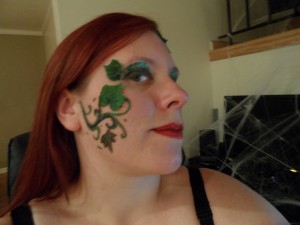 OK, so the makeup was professionally done by an amazing costume company in Batavia, IL called All Dressed Up (I’m not that much of a genius…the chick literally GLUED glitter to my lips. It was awesome.) She painted the ivy on my face using face paint, glitter and glue (including my glitter glued eyelids). She then glued the ivy to my face with the glue as well. 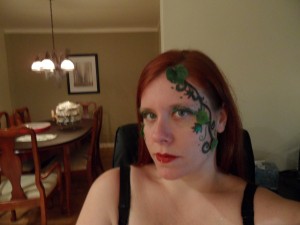 After I decided that I was going to be Poison Ivy, I told Brian that he could be any Batman Bad Guy that he wanted. He opted for Ras Al Ghul. He got a green cloak, added gold accents and shaved his beard all funny. It was awesome. 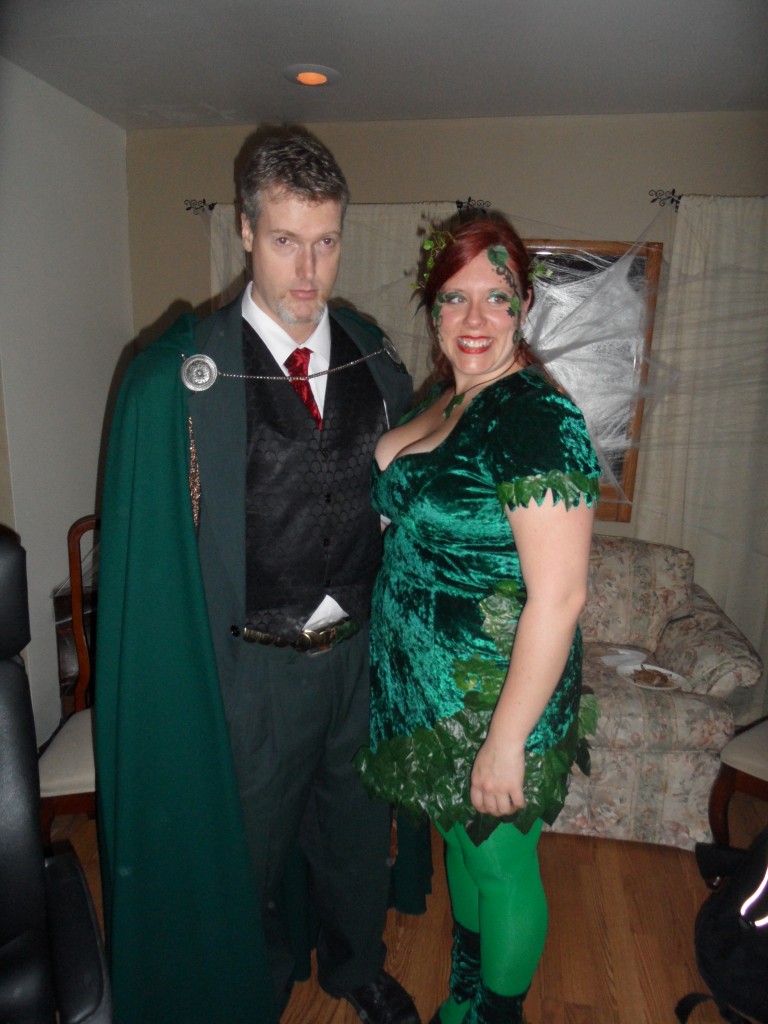 For the Poison Ivy costume, I took a velvet dress I found at a thrift store and cut the neck down to something borderline inappropriate and trimmed the sleeves (which I used as leg warmers). Then I individually glued fake ivy leaves (also acquired at thrift stores) all along the edges of the dress and spiraled them up and around the back.

For my accessories, I glued sprigs of ivy to a headband so I would have ivy in my hair, I glued a piece of ivy to a cheap necklace, and then I individually glued ivy leaves all around a pair of pointy toed pumps. I bought the plus size green tights and almost called it a day…when I realized I had a green purse that would be perfect with ivy glued all around it as well. To this day, this was one of my favorite costumes.

The poison ivy costume maybe cost me $15… and about 20 hours of manual labor. Yes, I individually glued on all of those leaves. On the dress, on the shoes (those shoes were BLUE), even on a purse. The shoes and purse were my pride and joy–I still have the whole thing.  I was pretty impressed with myself. (OK, I’m usually pretty impressed with myself…but other people were impressed too!)

So there you have it, my Pincreations from the days before Pinning was a thing. From the days when I actually had to Google shit to put it ON Pinterest. (Yes, most of my original pins were pinned from Google images. You’re welcome.) So thanks to me, Poison Ivy Costume Hunters can have a great Halloween.

What are your favorite things to pin on Pinterest?