Maybe that title was a little much. It’s not that I’m angry. Or jealous. I mean… it all worked out, right?

As this is the second in a to-be-continued…we can also call this “The Bartender- Part II.” But let’s be honest. My original title is way better. (And the security in my current relationship allows me to write about those feelings which I no longer feel).

After many months of dating, and not an ounce of jealousy on my end (which was relatively unusual for Chrissy… I don’t think Brian’s ready for that…), The Bartender went back to school for the fall semester. Things were supposedly progressing quite nicely…he had planned his schedule around mine, so that we could have more time to go out and spend together.

It was then that I started hearing about Kirsten (Keer-sten), which I think is the dumbest name on the planet. (I’m really sorry if you are reading this and your name is Kirsten. You probably think Chrissy is a dumb name. Meanie.)

For his birthday, I took The Bartender to a Blackhawk’s game. Where we ran into Dennis Savard on our way to our seats. It was really fuckin’ cool.

But shortly after his birthday, The Bartender started getting weird. He was a little more distant and I could tell something was up. So we talked about it. And he wasn’t sure. About the us thing. He told me that I seemed so sure and he just wasn’t. I told him, truthfully, that I wasn’t sure either, but that getting there was part of the fun. At the time, I couldn’t imagine going through the dating scene again.

Then a few months later…(while I was treating him to a fancy pants dinner that the secret shopping company was paying me to eat) The Bartender told me that he might be able to buy tickets to the Packers/Bears game. Oooohh! Exciting! Oh…right…and that he wouldn’t be taking me.

He was going to buy them to take Man-Wife.

He was going to buy them from Kirsten.

So I got a little upset. Though I was reasonable. And the subject was moot, because he wasn’t sure.

A week later, I excitedly told The Bartender that I was getting FREE Bears/Packers tickets.

He still bought tickets from Kirsten. He still planned to go with Man-Wife. This time, I was not reasonable. I was really fuckin’ pissed, and sad, and upset, and confused, and bewildered, and a million other things that I didn’t even know how to verbalize.

After a pretty hefty fight, The Bartender finally agreed to give Man-Wife and his brother the tickets as an early Christmas present and attend the game with me.

It was at that game that I discovered several things:

1. Tiny little Kirsten and her tiny little girlfriend, both wearing pink Bears clothes (ICK), were also in the seats. Apparently, The Bartender was not only fighting with me to pay to see a game with Man-Wife…he wanted to pay to see the game with Kiiiiirsten.

2. Kirsten’s seats were just a few rows away from the seats I frequent. (This would later become a problem.)

Less than a month after that encounter…Just two days after New Year’s… (The New Year’s that my boyfriend refused to request off to spend with me)…My boyfriend dumped me. I should have known based on the fact that my boyfriend of almost a year gave me a DVD for Christmas…(and gave my parents an autographed baseball). But I didn’t. I had no clue.

But he did. And I was…surprisingly okay. I cried some. I drank a lot. I escaped to Peoria to spend time with my lovies. But for the first time in my relationship life, I was okay within a week. The crying just…stopped. Easily. It was like I knew all along that he wasn’t the one. 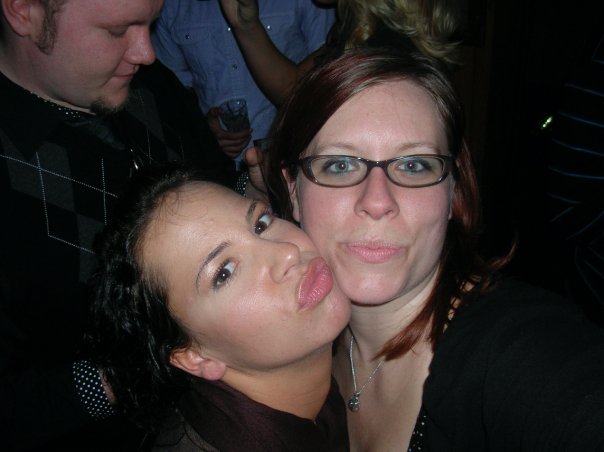 And it wasn’t totally easy… I mean, I still got super panicky going anywhere near The Bartender or his place of employment. Like physically ill panicky. It was bad. And when I had to watch the Bartender and pink-clad Kirsten making out at several of the following season’s Bears games, I was less than thrilled.

But when I think I saw The Bartender a few weeks ago, I was fine. (I could barely tell if it was him. But I think it was.)

Of course, I’m of the belief that everything happens for a reason. If it weren’t for The Bartender, I wouldn’t have felt that I was worthy of the amazing-ness that is Brian. I would never in a million years thought that I was good enough for him. But I learned from The Bartender that I needed someone smarter than me (OK, just as smart, but in different ways). Someone who liked nerdy things. Someone who would think my quirks were adorable. Someone who had endearing quirks. Someone who I could love unconditionally. Someone who just…got it. Got me.