In Which I Annoyed the Crap Out of 138 Souls, 6 Flight Attendants, a Pilot, Plus 4 Lap Children on a Small-ish Aircraft

I remember the day that The Bloggess starting following me on Twitter like it was yesterday. I was stoked. I mean, she’s the freakin’ BLOGGESS! And she’s funny. And her blog makes me laugh. But it took me a while to read her book. In the end, I couldn’t put it down. I finally finished.

Last week, Brian and I made our way back to Florida for another fun-filled vacation of joy in which I did a whole lot of awesome things when Brian wanted to be sleeping. But this post isn’t about our trip. This post is about airplanes. And The Bloggess (Jenny Lawson). And her book, Let’s Pretend this Never Happened.

On our flight down, I was reading a book that I was less than impressed with (and will not name) because I wanted to finish it before getting back to laughing hysterically at the one and only Jenny Lawson. I was stuck in the middle seat next to a larger older lady who took up her seat, half of my seat and some of the aisle. Needless to say I was not pleasantly seated for the 3 hour flight.

Not only did Bitchy McBitch feel the need to take up half of my seat, she also glared at me. Like I was spewing poison from my left cheek or something. Sure I was sitting up, leaning on my tray, but that was only because I needed somewhere to rest my arthritic, carpal tunneled wrist and she was in my way.

I feel that it’s important to say here that people who are stuck in the middle seat should be granted BOTH fucking arm rests. Also, people who recline their seats on airplanes are ass hats.

But we landed safely.

On our flight back, on the other hand, I had an excellent seat. I went in with a plan. My seating on Southwest was about 60 people before Brian, so I got on, and made my way to the very back of the plane, where the flight attendants informed me that there were 175 seats and 139 purchased. (I also overheard them say that there were 4 lap children. I’m not making shit up, people.) I sat down, and reserved the two other seats in our row.

When Brian arrived, I took the aisle, and he took the window. No one was going to come all the way to the back to sit in a middle seat. It was a brilliant plan. Once we were in the air, I scooted over and snuggled up against a sleeping Brian. Then I started to read. 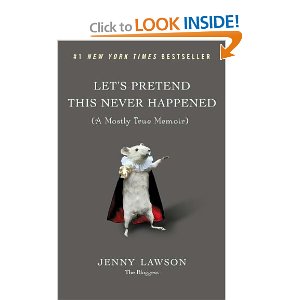 When I told the world that I was going to read this book, the world responded with a resounding “OMFG this book is amazing!”

I’m not going to lie, though. It took me a few chapters to get into it. I totally get that the strange happenings in Lawson’s life made her the brilliant and funny writer that she is, I just couldn’t really get into the Wall, Texas thing. I didn’t totally relate. I had heard there was laugh out loud humor…but I longed for a little Chelsea Handler…until…

Jenny Lawson grew up (sort of). And found Victor. And started making me laugh so hard I almost peed my pants. Twice.

Once the Bloggess grew up, I found that I wanted her to be my new best friend (Don’t worry Katie–you’re irreplaceable). I would be reading in bed and Brian would tell me to quiet down, for fear of waking our neighbors (like seriously, not jokingly.)

So there we were on the plane with 142 other souls ( I think it’s entertaining to say souls instead of people. Does anyone know why they did/do that? Please enlighten me!) and I was reading. And laughing. And reading. And laughing more. And every time I laughed, I looked at Brian and if he was awake, I made him read the paragraph that made me laugh. Or I would wake him up to tell him. Or I would just look to see if my laughter woke him up. And then I looked around to see if anyone was silently judging me. Which they were. But I didn’t care because Jenny Lawson is hilarious.

I love that she interjects with comments about her editor. I love the randomness that the book is created out of. I love it all. And I bet if I went back and read that first part, I would love that too.

And the whole time, Brian would wake up and comment that I needed to be quiet because the captain at the front of the plane could hear me laughing.

Jenny Lawson, welcome to my hero club. You have 142 “souls” to apologize to, because I was all up in their business during that 3 hour flight with my echoing laughter. They really should just read your book, and then they would totally get it.