BlogHer in Chicago: How to Make Nice with the Natives (Commuters)

Guys, I’m SO excited for BlogHer. I KNOW you are too. Even if you’re not going, you can participate via your computer chair, your couch, your bed or naked on a bearskin rug in front of YOUR fireplace (I don’t want to see that shit.) But let me tell you a little secret. Most of Chicago…wait for it…

In fact, they probably don’t care. (I care. And my bloggy friends care. And you care. And YOUR bloggy friends care. And all of the lovely sponsors care. But, we have to be real about this.) Chicago is one of the major cities in this beautiful country of ours, and thus hosts fancy conferences more often than we attend them. More often than we would ever WANT to attend them. So you’ve got to understand that the locals (or natives) will just see us (yes, me too) as touristy conference people interrupting their daily routine. But we can avoid all that nasty nonsense.

I’m going to guide you through the life of a commuter and give you a few pointers on how to make them not hate you.

Between the hours of 6 and 9 am & 3 and 7 pm, public transportation (particularly the commuter transportation (Metra – Union Station and Metra – Ogilvie Transportation Center) is a circus. Walking near, to or from one of these hubs is going to be difficult at best and downright painful at worst. If you’ve got rolling luggage, just do everyone (yourself included) a favor and take a cab. That’s what I’ll be doing when I head into work with my luggage on Thursday morning. NEVER walk against the grain of traffic. Cross the street and avoid this: 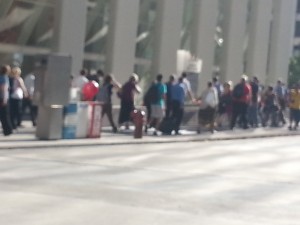 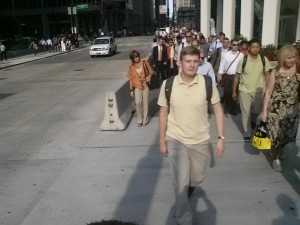 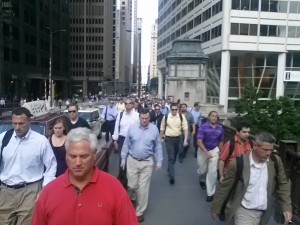 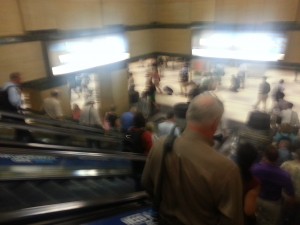 If you’re riding one of these commuter trains, it’s important to follow the rules of etiquette on the Metra.

Also in relation to walking…we follow one golden rule: As a pedestrian, it is illegal for a car to hit me. So we play the daily Frogger.

If you’re driving, steer clear of driving through yellow lights, and you’ll be fine. We’re trained to walk the minute your light turns yellow.And sometimes we cross on a diagonal, so just be cautious.

I’ve told you about bringing an umbrella…but there’s an etiquette for carrying umbrellas amidst the commuters and the city-natives. If you have the largest umbrella on the block, and you’re walking past someone, lift that shit up. As high as you can. Knocking into people isn’t nice. If you’ve got a smaller umbrella, tilt to the side or lower it to your head. Be nice to people and they’ll be nice to you.

When you travel, how do you interact with the locals? If you’re a local, what tips would you give tourists?