Steampunk Sunday: Change it up with a Steampunk Halloween

This post is part of a sponsored post series about the steampunk lifestyle. This campaign is sponsored by Steampunk Goggles. All opinions are totally my own.

Do you know what Steampunk is? Thanks to my partnership with SteampunkGoggles.com, you’re going to be treated to a series of delicious posts this month about Steampunk. And if I have my way…a guest post from my boyfriend. (No promises, there, kiddos. I don’t always get my way. This isn’t Burger King.)

So I’ll ask again. Do you know what Steampunk is?

I didn’t. Well…until I met my boyfriend. 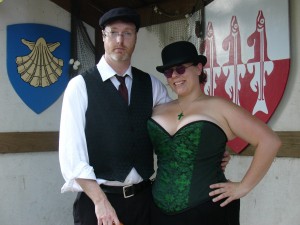 So, I’ve always had an obsession with the Victorian era. And apparently, so has Brian. What made the two of us slightly different was that while I was reading Jane Austen and dreaming of Fitzwilliam Darcy, Brian was rocking with cool Steampunk goggles, gear and dreaming of vintage sci-fi magic. Brian was down with Steampunk. And so I learned a bit about it. And we see it in some of our annual adventures. Steampunk costumes show up during cosplay at Gen Con and Comic Cons. We even went to Steampunk Day at the Bristol Renaissance Faire! As you can see, I’ve taken it to heart.

So you’ve probably noticed that this is something of a geeky nerd culture. But it’s totally geek chic. Obviously. If I’m involved. 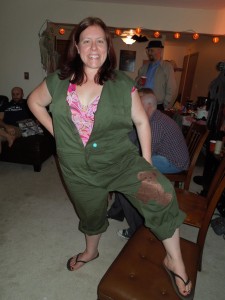 The thing I love about Steampunk is the DIY/anything can be Steampunk aspect. Take my Kaylee Frye Halloween costume (Check out that Teddy Bear patch that I MADE BY. MYSELF. I’ll write about how easy that was on another day.) While Firefly isn’t truly in the realm of Steampunk, it definitely falls into the unique category (for those of you who don’t know, it’s basically Space Cowboys. Old West Meets Sci Fi.) I could quite easily make this costume unique by adding a few accessories and accents.

Now, because I’m working with Steampunk Goggles on the kickoff of this Sunday series, I’ve got some exciting news for you. You can get your own sweet pair of goggles with a special discount (What what!) of $5 off $30 or more PLUS free shipping with the code: TRIBERR1.

Steampunk Goggles is hosting a Pinterest contest to win a sweet pair of your very own goggles! Three lucky winners  will get a pair of awesome goggles, so go enter this Pinteresting Goggles Contest!

Blog Friends, are you into Steampunk? Is this all news to you? What do you think of it? Are you down with a bit of Steampunk Sunday every now and then?