I Didn’t Even Go to Lollapalooza, but Still got to Encounter the Crazies

If you follow me on the media that is very social, you probably know that last weekend, some of our friends decided we should lock ourselves in a room with a zombie. You know…to practice for the inevitable. More on that later.

Of course, when you gather a group with 12 of your closest friends, scheduling becomes…slightly difficult. So we found one weekend this summer (that’s right, one) that worked for us. And we obviously needed to do this as immediately as possible. We opted for August 2. Gearing up with excitement, we quickly realized…Oh fuck. It’s the same weekend as Lollapalooza. And Bears Family Day. But mostly it was Lollapalooza. And did I mention that Trapped in a Room with a Zombie is RIGHT across the street from Lolla? 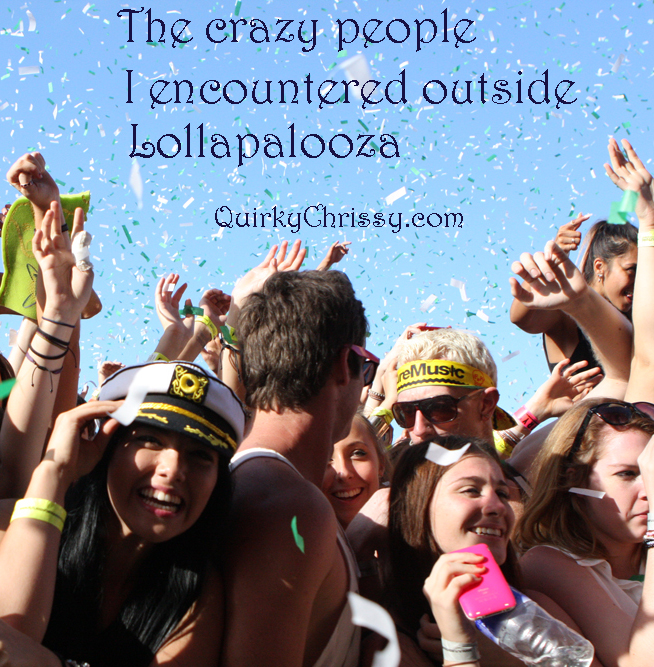 Four of us commuted into the city together via train because we’re commuters and that’s how we roll. (Fuck driving through swarms of teens in crop tops and high-waisted short shorts.) When we jumped on the train, it appeared that we were going to get some free entertainment from the guy in our train car with a guitar and a singing voice. And so we did.

In which I engaged in conversation with one of the crazies

After we got off the train, I was in need of a little something to cure my stomach ache, so we stopped at the nearest 7 Eleven (convenience store). Everyone waited outside for me, so I was on my own in this little establishment.

As I’m deciding what to get this chipper fellow in his mid to late twenties, clearly high as a kite, bounces into the 7 Eleven, grabs a couple cans of beer and heads to the register, where I got in line behind him. While I waited in line, I overheard him talking to the cashier.

“So…like…do you know anything about Lollapalooza?”

The cashier just kind of shakes his head and rings up his tall boys and smokes.

Here’s where I chime in with my goody two shoes. “I’ve heard that’s a bad idea.”

And then he started addressing me.

“Yeah, but like do you know if  there will be more cops than last year?”

“I have no idea.” “Because I heard it was pretty easy last year. I’m thinking I’ll just wait until it gets dark and hop the fence where no one’s looking. I don’t think the security can arrest you.”

“Well this guy that I smoked with last year told me it was really easy to do and he did it.”

At that point, his purchase was rung up and the cashier was ringing me up. Then one of the two teenagers (a girl and a guy buying Arizona iced tea) behind me chimed in.

“Are you talking about Lollapalooza?”

The guy responds, “Yeah! I’m just going to sneak in.”

“You guys wanna come with me? I’ve got some beers.”

“Okay, so if we’re going to do this, we have to  do it right. I’m from Hinsdale (a rich suburb of Chicago) and my dad knows a lot of cops. So like, we should be able to get out of trouble and stuff. I’ve been in jail once, so we  have to do this right. Just follow my lead.”

At which point I walked outside, burst out laughing and walked half a block down before I could relay the conversation back to my peers.

Sometimes I’m a little crazy or clumsy. One of those.

We made our way to one of our (my) favorite loop eateries, Elephant and Castle (I don’t like to drink here, though because booze is expeeeeeeensive), where I became one of the crazies…when I broke the motherfucking toilet paper dispenser in the family bathroom. 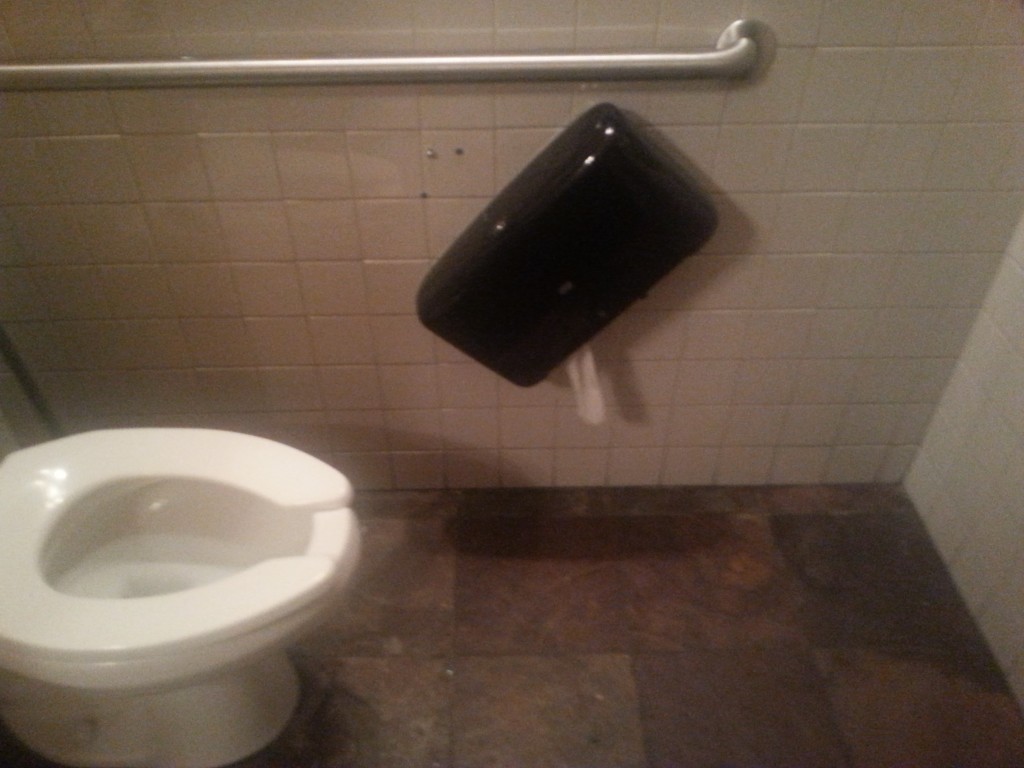 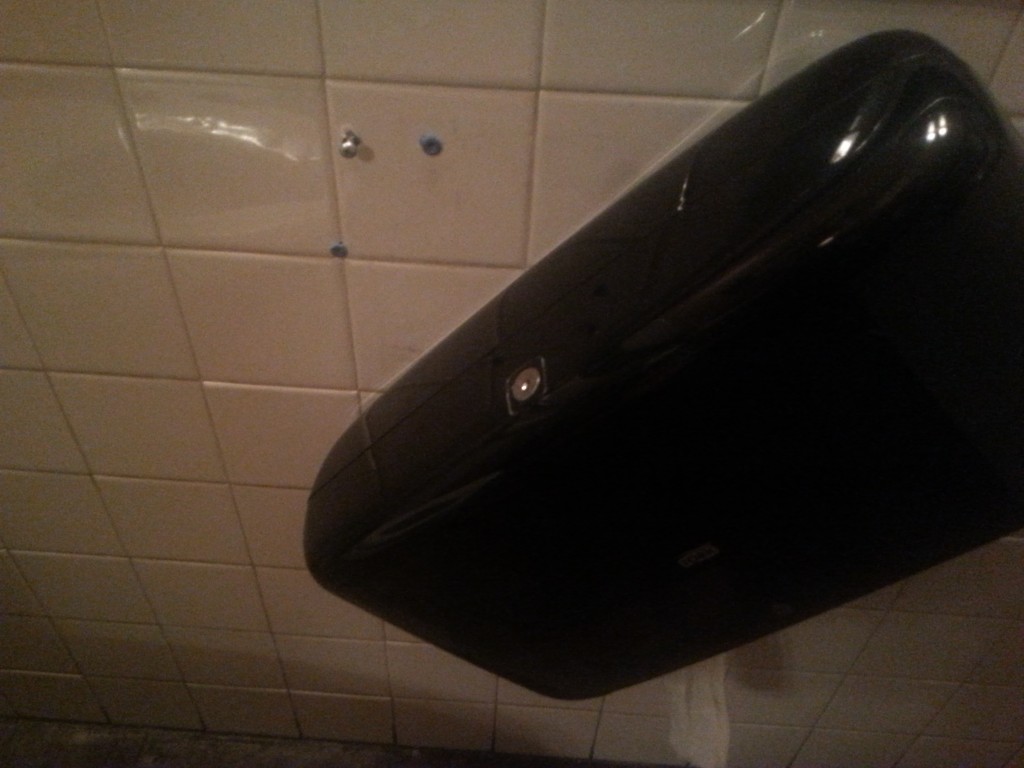 After an hour locked in a room with a zombie, we realized that Lolla was ending and ending fast. We knew we needed to hightail it outta there before the crazies made it to the train… As we were walking back to the train, this random guy starts talking to no one in particular, but maybe me. I don’t actually know. “I’m so glad I didn’t wear sandals or boots, man. Like, these shoes are awesome.” At which point Brian walks up closer.  “Dude, these shoes are the BEST. It’s like walking on yoga mats, man. They were only $9.95! You should get a pair!” Walking on yoga mats, indeed. We hightailed it across the street in a jaywalking fashion that would have been weird if 3 of the 4 of us weren’t commuters who did it everyday. Although, maybe not weird, considering the number of unobservant Lolla kids who were drunk/stoned/high/didn’t give a shit. Probably that. Lolla had screwed up the train schedule, so our train was an hour later than we planned for and by the time we left the station, it was standing room only. I was pretty thrilled we had secured a seat, but less impressed with the drunk, half-naked teenagers standing next to us.

Do you go to big festival concerts? Have you been to Lollapalooza? What crazies have you encountered lately?