That One Time I Stole my Best Friend’s Car

Where do I begin? 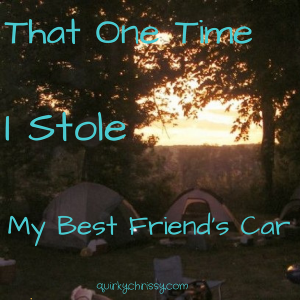 I guess I’ll start at the beginning…with the float trip. When I was a noob adult, fresh out of college, I would spend a long weekend in the summer with a large group of country boys from Central Illinois and college friends. It started small with about 15 people, but by my last year, it was up in the high 40s. We’d caravan down from Chicago to Missouri in a snowball fashion, picking up more cars along the way.

We had walkie talkie communication between cars, as this was before the days when everyone had a reliable cell phone with unlimited mobile to mobile talk time, back when roaming was expensive and people could go off the grid for whole weekends without Facebook or MySpace or whatever it was that we used. Nobody went into withdrawal or anything either. It was nice. And entertaining. We’d pass each other on the road and make commentary on the other cars/people we were passing.

One such float trip, I convinced my dear friend Mark (name changed to protect the innocent) to come along. Little did I know, he hated camping. Drinking, he loved, but when the opportunity to sleep in a bed jumped at him after night one, he was all, PEACE OUT BITCHES.

His best buddy from high school lived close to our campsite and he spent half the weekend with him. Which would have been fine if he returned to the campsite before everyone else had left.

One of my girlfriends and I had ridden down with him from Chicago and on Sunday morning, as everyone else packed up their stuff and rolled out of town, we sat there. Waiting for Mark. The last man standing, the guy who organized the trip stuck around with us for a while longer, waiting for Mark’s imminent return…but it wasn’t happening. We tried to call him, but the campsite was getting zero reception for our phones. The other guy was ready to leave. And we were two twenty-something girls in the middle of Missouri. This was a bad horror movie waiting to happen.

So we did the only logical thing we could think to do. We got into Mark’s car and started driving. The plan was to go somewhere with phone reception (and people in a public place), call Mark and wait.

Except that Mark was driving past us with his friend and kind of freaked out when he say his car.

There was some serious yelling. On both sides. I was clearly pissed that he would leave me stranded in the middle of nowhere, and he was pissed that I “stole his car.” I mean, to be perfectly honest, I can’t blame him. My driving record at the time wasn’t the greatest…To say that the 6 hour ride home was stilted and awkward was an understatement. Sometimes, I wonder how he still loves me. But the best kind of friends forgive, I guess.

Have you ever done anything really crazy and really pissed off your best friend? What’s the worst fight you’ve ever had with a friend?