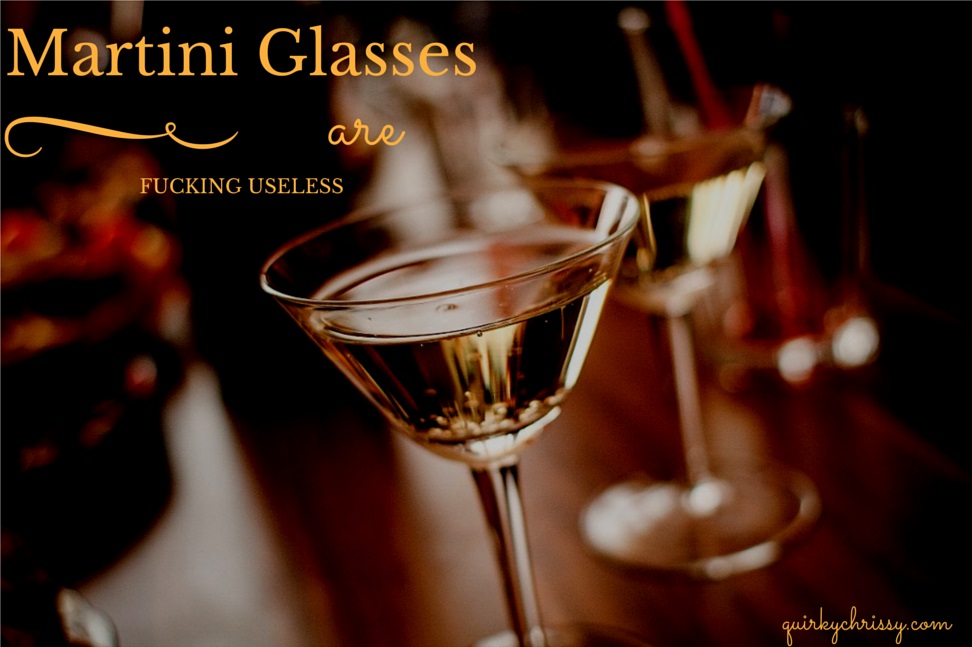 After I broke all three martini glasses at our shot and a beer joint, I was no longer allowed to possess a martini glass in my hand at the bar. (Of course they replaced the ones I broke). At the time, my little brother was the bar manager. Every time he trained a new bartender, I’d sit on the patron side and test their mad skill. I’d teach them how to make a cosmopolitan. And then I’d giggle profusely, making them question my educational abilities. I’d grin at my brother, lift my glass and clink his imaginary glass in celebration. And then I’d take a big swig of that delicious vodka delight. And giggle some more.

He’d run over and tell the nervous bartender that I could drink cosmos all I want, but they weren’t allowed in martini glasses if they were being handed to me. I was banished from those ridiculous and easily breakable glasses.

So of course, my best friend Mark thought it would be funny to buy me a pair of martini glasses for Christmas.

They lived in my car for a few weeks before I finally, not-so-ironically broke one and took the other inside into my house. It sat on a lonely shelf in my bedroom for a few months. For
my birthday that year, I received one of those fancy pants Lolita martini glasses. I thought it was the greatest fucking thing ever. I was an idiot.

I decided that I would start a martini glass collection, and made it my business to find Lolita glasses on clearance to cheaply add to my collection. 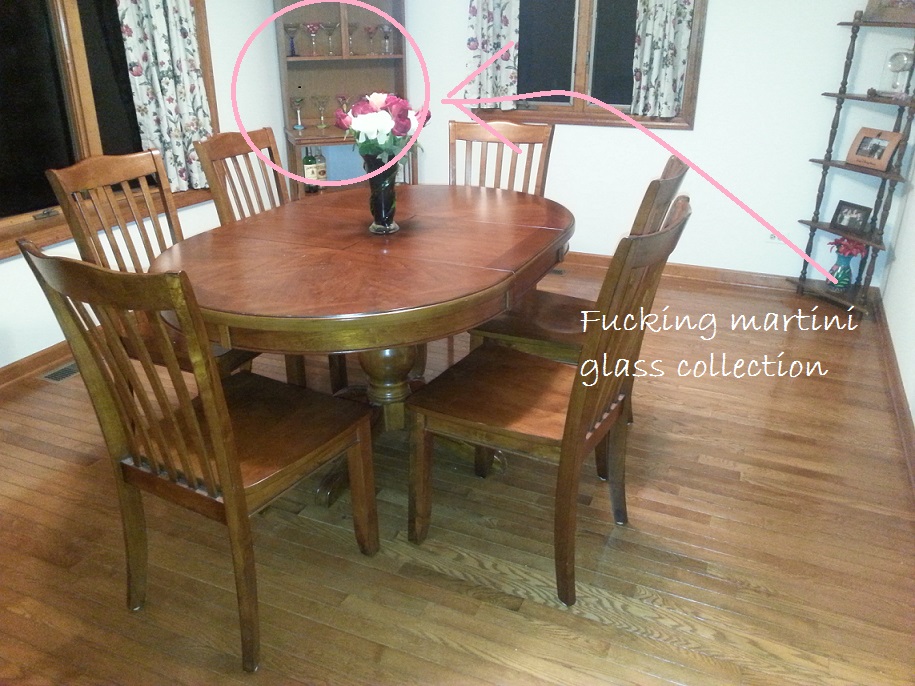 You may remember we recently bought a house. I have a place to store and display those fancy fucking martini glasses. Except for the one I broke while I was unpacking them.

What you may not know is that I volunteered to host Christmas for 30-40 people this year. And that I’ve already hosted a couple of large gatherings. And you know what? No one drinks fucking martinis at house parties. They drink beer. And wine. And other shit.

Last week, after Thanksgiving with Brian’s family, I realized that if I’m hosting Christmas, I’m going to need cordial glasses for Bailey’s. And rocks glasses for Manhattans. And snifters for brandy or something.

So I called my mom, who was sleeping. Dad answered, so I asked him, “How many cordial glasses do you have?”

When I cleared out the bar after we went out of business, I never thought to grab ALL the glassware. I took shot glasses and stupid shit…like a CASE of fucking martini glasses.  A case. A whole fucking case.

And now I’m a grown up who has to buy cordial glasses and rocks glasses, but has a fucking armory of martini and shot glasses.

So me and martini glasses? Not friends. Even though I have a collection of them hanging out in our dining room.

Do you have an unplanned collection of anything? What do you collect? Have you ever broken a martini glass? Do you think martini glasses are stupid & useless, too?