Manic Monday: Got a Long List of Ex-Lovers…They’ll Tell You I’m Insane…

Confession: I’m obsessing over Taylor Swift’s Blank Space. Obsessing. Please stop judging; you were 25 once too. Taylor’s song is all about falling in love, and following it up with baller crazy bullshit. The video is…well…insane.

When I was 25, I was FINALLY mostly (one or two indiscretions notwithstanding) over my college ex. But fuck if I hadn’t gone twelve kinds of crazy up to and beyond that point a little like Taylor and a little one own bird of insanity. Regardless of what I did…my exes will certainly tell you I’m insane. But I’ve got a theory. 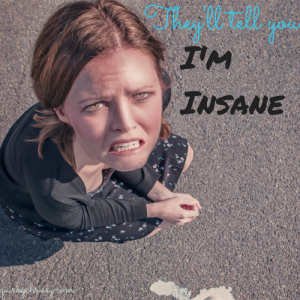 If you don’t know my theory on men vs. women…get ready for it.

All women are crazy.

All men are stupid.

The trick to making a relationship work? It’s not finding the right girl on the Vicky Mendoza diagonal or finding a guy who isn’t a complete moron to miss how absolutely perfect you are…

The trick is to for a guy to find a girl who can handle his brand of stupid. And he needs to be able to handle her brand of crazy.

My college ex used to tell me that  I had a high frustration capability because he’d get upset really easily whenever I did anything that was considered, “crazy.”

I took this and ran with it…because he wasn’t wrong. The frequency with which I injure myself isn’t normal. I talk A LOT. I ask questions A LOT. And I over-think EVERYTHING. And I have weird OCD tendencies. And push buttons when I know I shouldn’t push buttons…And probably more. So, most of the guys I’ve dated would probably tell you that I’m insane. ESPECIALLY my college ex.

But I also have a low frustration tolerance. I can’t handle too much stupidity before I want to cut a dude. Occasionally, I’d meet a dude who could absolutely handle my crazy…but I couldn’t, for the life of me, stand their brands of stupid…mostly the drug addict and Staley…and mostly because their brand of stupid was drugs. Drugs=deal breaker.

Luckily, Brian is REALLY fucking smart. Like brilliant. And he can handle my crazy. He finds the weird shit I do adorable.

I have a lot of girlfriends who (God only knows why) come to me for relationship advice. They have for years. I’m not an expert, but I’ve had my fair share of experiences. In my relationship journeys, I’ve seen that women think too much about shit that men don’t care about…and men don’t think enough about the things that women want them to think about. But every once in a while, you’ll find someone who harmoniously matches their stupid to your crazy or vice-versa…

Let’s journey down the rabbit hole of crazy together, Blog Friends.