Desperately Seeking Something: How to Fuck Everything Up

After I met two cool guys at the bar at which I was working, and stalked the shit out of the handsome one, I went into work that next afternoon, swooning. The mysterious Grown Up (formerly known as Handsome) was completely occupying my mind. I was always game for a challenge, and someone who couldn’t be found on social media was definitely a challenge in my book. My bartender friend and I spent the very slow work day planning my future wedding to my newest crush. 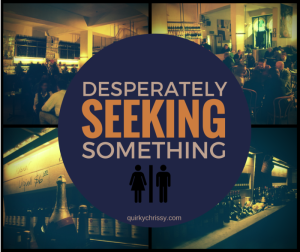 I didn’t have to wait long for the first real email. Some time around noon that afternoon, The Grown Up responded to my adorable comment with just enough sass to make me laugh and just enough weirdness to make me smile. I knew responding to him was going to be fun.

He told me that I obviously had beer goggles on, as he was definitely not “adorable,” though I was welcome to call him dashing, debonair, distinguished, or even elegant. He made some ridiculous nonsensical commentary on my email signature, which referenced a leadership role in an organization and my consultant status for Tastefully Simple. It was teasing, light, and absolutely adorable. His sense of humor really nailed it for me. It was just random enough to make me think more and carefully craft a response that played off his playful tone.

I told him that he was definitely all of those things, but he was also adorable with the definitive argument that it was my word and so it would be that he were adorable.

I added a little light banter about his obvious modesty, and sent the response later that evening. As I waited for another email, I analyzed every word in his first email. I used any personal details to continue my Google search. I still couldn’t find him on social media. Maybe he didn’t have a Facebook account. Maybe he wasn’t that techy or internetty. I even sent him a chat request that went unanswered.

But he e-mailed me the next day using that same, adorable and teasing tone.

I was seriously hooked. His word choices. His sense of humor.  He was smart. And a smart ass. I loved him. I sent another chat request before responding to his e-mail.

Actually, I sent him several chat requests that soon went unanswered. Shit. Was I fucking this up already?

If you didn’t already know, I was/am a master of fucking things up. I push buttons…A LOT. I kinda like testing my limits. It’s a thing.

My third IM (which was on the third day – and actually in the morning, and not at night) was met with an awkward response that made perfect sense. He worked at a computer all day. If he looked like he was online at night, he probably wasn’t ACTUALLY online.

So we briefly conversed about our jobs and career paths, and I told him I wanted to be a teacher. Our conversation concluded with this little blurb of utter genius…something that I had forgotten completely until finding old conversations to use for this tale.

After a three day Gmail love affair, though…life took its typical turn in relationship Chrissyland…and the handsome Grown Up didn’t respond again. Christmas was a few days away, and my last e-mail went unanswered. I failed to send another desperate IM during the busy that was Christmas.

Two days before Christmas, I met someone else…and two days after Christmas, someone from my past came back into my life, and the Grown Up that wasn’t pursuing me got pushed to the backseat by the boys that were. I suppose the saying is true…when it rains, it pours. And for me, it was raining men.

Was this the end? Would I ever see the Handsome Grown Up or Bright and Shiny again? Friends, tell it to me straight – have you ever pushed a little too hard when you were interested in someone? Do you not push enough? Tell me your tales of woo and woe!

Find out what happens next by clicking the picture below! 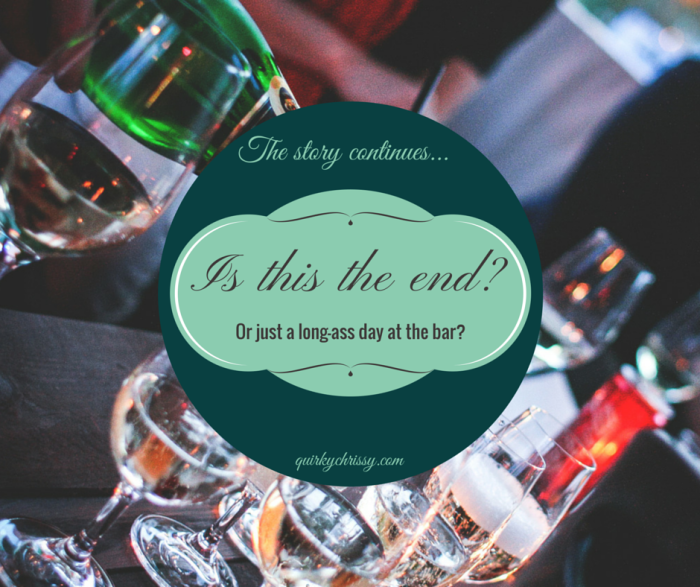