3 Backstabbing Games You Need to Play

Today is a glorious day my friends!

It’s International Tabletop Day! Brian and I shall celebrate by gathering with some of our board gaming buddies and playing copious amounts of games while snacking and boozing. Life is good today. In honor of this beautiful nerdy-as-fuck holiday started by one of our favorites, Wil Wheaton, and crew (Geek & Sundry, y’all), I thought I would share with you some games that you may not know exist. But should. Because holy hell are they fucking awesome. Also, these games are not for the weak at heart. These games are specifically chosen because they involve a lot of yelling. Screaming. Fuck-your-mother-ing. But I’ve played all these games with my mother. So there’s that. 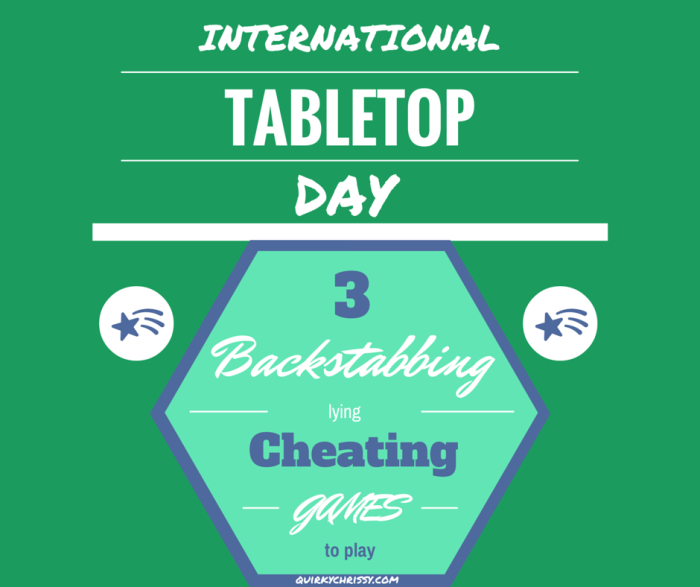 When introducing non-gamers into the world of serious gaming, I used to use The Settlers of Catan

as a gateway game. I like to think of it as Monopoly meets serious gamer. But then I discovered Trailer Park Wars. And oh shit you guys. This game is fucking hilarious. And ridiculous. And SUPER easy. The concept is simple, build a trailer park with trailer cards, amenities, and residents. Each amenity and resident offers benefits and (most importantly victory points). While you’re building your own park, your opponents are doing the same…but you’re also trying to destroy one another’s parks. With cards that send tornadoes through your neighboring park’s trailers, infestations and romances, you can kill, steal or move trailers, people and amenities. Flamingos

flank your playing area as the victory points. Hillbilly accents and names are highly recommended. (One day, I’ll introduce you to my alter-ego Gina May). My PARENTS think it’s hysterical. My friends love playing. If you’re into horror flicks, you can also add the expansion, Trailer Park Wars: Terror in the Trailer

which gives you more cards and more ways to screw your neighbor.

Did you ever play MAFIA or WEREWOLF at Denny’s on school nights? No? Just me? Okay,  well, this is the ultimate lying and deduction game. There’s a werewolf (or a few werewolves) in the town, and the villagers are ready to hunt this shit down. Except that no one knows who’s a villager and who’s a werewolf. Each person receives a card revealing their identity, but no one knows what anyone else’s card says. The first phase of the game allows some people (werewolves and villagers) to do things in secret while everyone’s eyes are closed (there’s an app that tells you when you can do your thing!). Some people can look at other cards. Some people can look at each other. Some people can even move cards around. Then you open your eyes and the clock starts. You have to decide who the werewolf is and kill them. If you’re a werewolf, you want people to kill a villager by mistake. There’s a lot of yelling. And lying. And “YOU’RE THE WEREWOLF!!!!!” It’s pretty much amazing. This one’s a favorite in our gaming group, but I also got my parents and aunt & uncle to play on Saint Patrick’s Day. My mom was laughing so hard it hurt (probably because she’s a TERRIBLE liar). She’s still on the fence on this one. Oh yeah, this one ALSO has an expansion, which they Kickstarted last year: Daybreak

This one is equally as fantastic. You’re a band of thieves. You work together to rob a bank, but now what? Oh, right. You take out the competition. Each person has 3 bullets (Bang! cards) and 5 blanks (Click cards). You choose your weapon card, and on three, everyone points their foam gun (did I mention there are foam guns?) at someone else. At this point, depending on how many guns are pointed at you, you can choose to go forward for the loot (BONZAI!) or chicken out (put your gun down, homie). Those who chickened out and those who are shot, are out of the running for the loot. Everyone else divides the pot between themselves. At the end of 8 turns, the most money wins the game. Of course, I wouldn’t recommend playing with people you don’t mind stabbing in the back. I felt REALLY bad for my friend Beth’s boyfriend (and Brian), because of five of us, they were the two that I felt comfortable destroying. I made the mistake of going for Cletus once, and he wrecked me right back. So the other two guys it was.

What are some of your favorite board games? How will you celebrate International Tabletop Day? What’s the best lying, cheating, backstabbing, screw your neighbor game you’ve ever played?

No one paid me to talk about these games, but links in this post will direct you to Amazon. If you make a purchase, I may receive a teeny tiny commission. Which is awesome. So thank you.