I love culinary professionals. My first full-time job was as a catering manager at a small, private college. Our chefs were absolutely fantastic, and I was and am proud to call them my friends. I’ve worked with several amazing chefs over the last decade or so, and I learned so much from them – lessons I’ll remember forever. Of course, even with incredibly talented chefs in my social network, it’s always exciting to speak to the chef or meet the chef of a fine dining establishment (especially when they’re TV famous and stuff…you know how starstruck I can get). 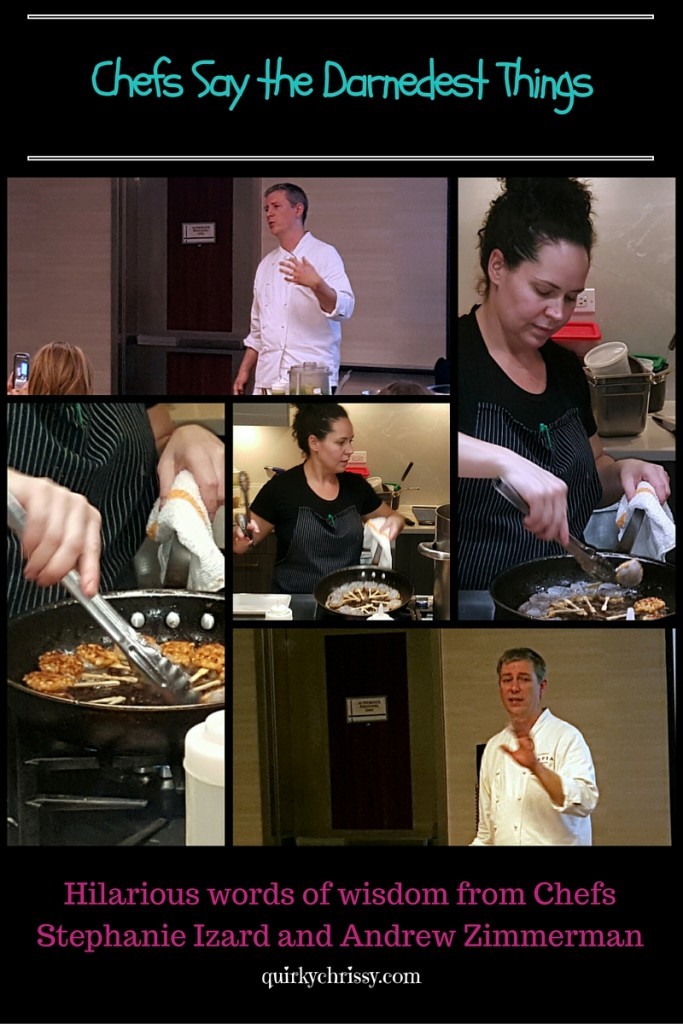 I recently returned (okay fine, “returned”) home from BlogHerFood, which was hosted in Chicago…so really I didn’t go anywhere. Hell, I didn’t even sleep in a hotel. I drove home every night. Well, the first night, I took the train home. Whatever.

At this delicious (actually delicious because SO. Much. Food.) conference, I had the pleasure of attending a couple special events with food demos from local and TV famous chefs.

On Thursday night, I was invited to a dinner hosted by Canadian Lentils to gear up for International Year of Pulses (a celebration of lentils, beans, chickpeas and peas) in 2016. Chef Stephanie Izard (Top Chef Season 4 Winner and Fan-Favorite, who also happens to be a Mom-approved favorite by the world’s toughest critic, my mom) hosted us at Little Goat, which I’ve visited for brunch once before. In the private party space above the chic diner/bar, we were welcomed with cocktails and apps in a demo kitchen space that opened out to a fabulous rooftop patio. We were privvy to a fantastic food demo from Chef herself as she discussed lentils, food prep and more. Of course, I was taking notes of a different kind. 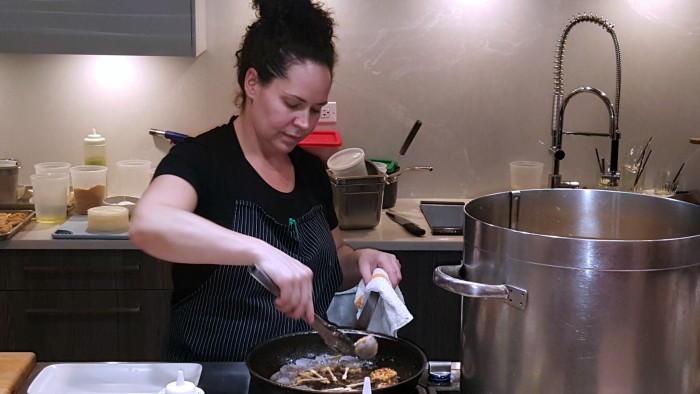 I’ve realized in my years of hearing people speak and listening in on other people’s conversations, that every now and then someone will say something in or out of context that is truly hilarious or hits home on the perfect spot. And so I wrote them down (slightly paraphrased, perhaps. Those cocktails were freeflowing, if I didn’t already mention that).

Stephanie Izard on doing the dishes

I was doing dishes, which I don’t do at home, but here I found it quite soothing…

I loved this little blurb. Because it made perfect sense to me. When things are stressful, sometimes doing something like washing the dishes can be incredibly calming. And I really love that she doesn’t do dishes at home. Neither do I, Steph. Neither do I.

Give people snacks and it’ll make them quite happy.

Isn’t that what I’ve been saying forever? Brian found the way to my heart through snacks (which he always keeps in his backpack for me – although it’s likely a defense mechanism to protect him from my hangry…but I digress…). Chef Stephanie nailed it. Obviously, we’re best friends now.

Stephanie Izard on finishing your plate

If you’re good and you eat all your lentils…

I don’t even remember what she said after that because I was laughing. Everything at the even had lentils in it. And everything was freakin’ delicious. So yes. Yes, Stephanie Izard, I will eat all my lentils. In a box, with a fox, in a house, with a mouse. Om nom nom.

We’re going to feed you til you drop.

Other than knowing I was in the right place, I really wanted to tell Chef that she didn’t even know what kind of promises she was making with that statement. I proceeded to eat, drink, and be merry thanks to my friends, Jeremy and Gillian (the world’s best bartender and server). 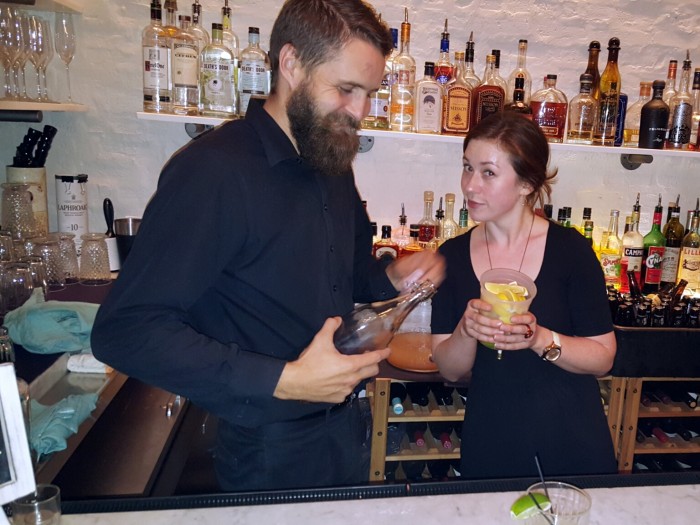 Honestly, it was a total win, and I stumbled full, drunk and happy to the train with my new found friends. I knew this food conference was the best decision ever.

The next day, exhausted and hungry, I arrived at the conference for Round 2. They started feeding me immediately upon my arrival and didn’t stop until I left Saturday night. It was heaven.

At lunch on Friday, I attended another foodie demonstration, hosted by Foodinsights.org and discussing the importance of protein from the food aspect to the fitness aspect. The demo was with Iron Chef winner and Chicago chef, Andrew Zimmerman. 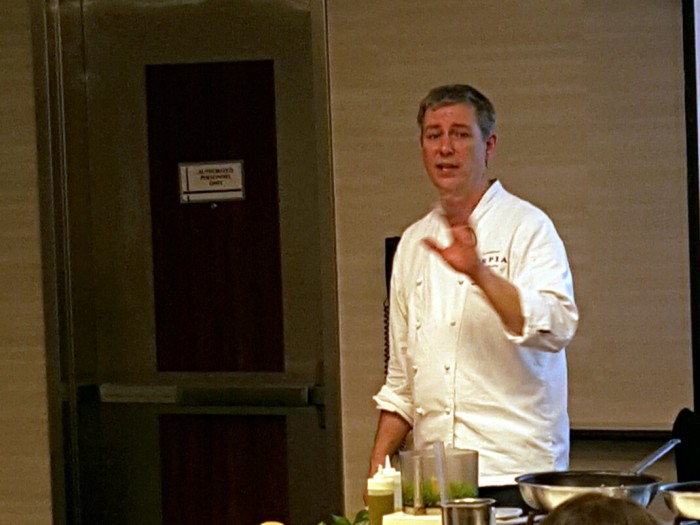 Usually, you cram it full of cream and cheese and butter, which is like vegan kryptonite.

Chef had me laughing my ass off with this one, as he was discussing his very much non-vegan restaurant and how he handles vegan customers. He makes them risotto (but, like, a vegan version without all the good stuff).

Play with it; it’s fun-all squishy and meaty.

I wouldn’t necessarily consider squishy and meaty fun, but Zimmerman has a point. Sometimes it’s okay to play with your food. Like when I’m making meatloaf and I play with the raw egg for a little bit before mixing it into the ground meat. Everyone has their weird.

Andrew Zimmerman on the cuisine of their restaurants

My restaurant is globally informed contemporary American which is basically my answer for whatever. I. feel. like.

His bullshit level is through the roof with brilliance, and I absolutely love him for it. If I ever had a restaurant, I would totally get behind a “whatever I feel like making” stance.

Bravo, my new chef friends, bravo. Thank you so much for your fascinating demos, your hilarious words, and most importantly, you’re delicious food. Because if there’s any real way to my heart, it’s through food.

Blog friends, have you ever met a TV famous chef? What are some of your favorite culinary moments (Mastering the blue box mac and cheese totally counts)? Ever seen a food demonstration? Who is the funniest person you’ve heard speak?