OMG what is she wearing? She’s just asking for it.

When I was 17, I was privately and publicly shamed by an administrator in my school. A woman I respected and admired told me that I couldn’t dress like the other girls. I was discriminated against because of my appearance. Because I had a more voluptuous body, a body I was already ashamed of because it was bigger than most teen girls, a body that I’d kill to have back, a body that eventually fueled an eating disorder, but one that I didn’t understand apparently held power against horny teenage boys. (I’ll tell you a secret, though: it didn’t. My body was not what teenage boys were looking for. It was something adult men found attractive, though. And I suppose THAT’S why I was told that my outfit was unacceptable.) 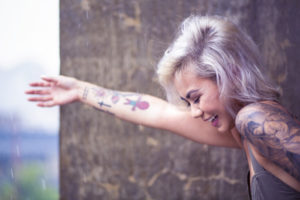 What was I wearing you ask?

In the peak of the new Millennium, I could have been wearing a tiny crop top and tight flared jeans. Short shorts and a skimpy tank. A two-piece prom dress that left nothing to the imagination.

But I was stylish in my short overalls with thick straps and a fully covered abdomen. The problem was in the strapless tube top that covered my breasts and stomach. It gasp showed my shoulders. But not any more than one of the very popular camisoles of the time. Not any more revealing than anything any of my cheerleading peers, who were much thinner than me, were wearing on that warm May afternoon.

And I was called out. By a female administrator whose name I still remember with crystal clarity. Who tried to mark me as her equal in womanhood.

“Women like us have to be conscientious of how we dress. We can’t wear the same clothes as the other girls.”

She was nothing like me. Tall, thin, in her mid to late 40’s. She didn’t understand me. She didn’t know me. And she certainly wasn’t like me.

But she did have the power to make me wear an old hoodie from the bottom of my locker over my overalls the rest of the day. The rest of that hot, spring day in an un-air-conditioned high school.

And I did. Because I was terrified of getting in trouble (save all those tardy detentions). Because I believed in authority. Because, at 17, I was already ashamed enough of my body.

This is what rape culture looks like. Rape culture shames a woman or a young girl into thinking she can’t dress a certain way, because boys and men can’t control themselves.

Rape culture lets men like Brock Turner out of jail after 3 short months, even though he ruined a woman’s life. He violated her body, and because of his “bright” future, he got off easy.

Brock Turner is out of jail. Do you remember him? You should. And you should probably stay away from him. Because he can’t control himself around women. And instead of the government keeping him away from and protecting us, we must do our best to stay away from him. We’re told to dress less provocatively and not to drink alcohol, instead of men like Brock being told not to fucking rape.

Well, I’m sick of this bullshit. For 16 years, I’ve held that memory of the school administrator telling me that “women like us need to be careful what we wear” for far too long. And school dress codes that favor boys, limit girls and promote rape culture need to disappear.

Let’s teach the right way to behave and stop worrying how people dress.