So my dog is becoming incredibly skilled at indoor parkour. If you don’t know what that is, Google it. I’ll wait.

Well, Nia is a master. When she gets the zoomies, she jets around our house, side-swiping and jumping on everything with a flat surface.

She can also clear 4-5 feet with a standing jump. Hopping on our couch, over the back? Child’s play. Jumping a gate to get to the top of our stairs? Piece of cake. Bouncing from one ottoman to the other like fucking Tigger? Done.

Clearly, all of these feats of strength means she’s an agility star in the making.

So the other night, after some serious playtime and even more serious zoomies, I decided that instead of trying to train the crazy out of her, I would help hone her skills. 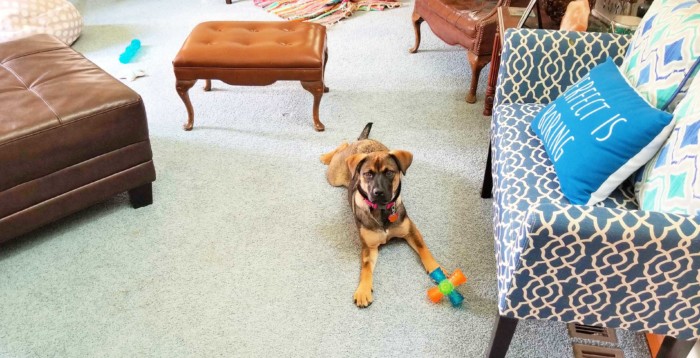 So I pulled out the small ottoman and started running to jump over it in the hopes that Nia would follow suit and chase me. She did, but she ran beside the ottoman instead of over it. Several times.

So I figured I’d try again.

As my right leg cleared the ottoman, my left foot caught on the back, making my landing less than a 10. I didn’t fall (for, like, the first time ever), but I did manage to feel a pop-pop-pop of bad. And also a searing pain in my left Flinstoe (Flinstone toe. It’s a thing) that turned out to be a broken nail.

I knew immediately something had gone awry and I stumbled to the couch, much to Brian’s confusion. He has never seen me actually injure myself, despite seven-plus years of experience with my injuries. I took a few ibuprofen, iced my knee, and made a bunch of Instagram stories about my foolishness, hoping there would be no pain when I finally peeled myself off the couch.

Much to my dismay (and with little surprise, if we’re being honest), I discovered that yes, Virginia, Chrissy hurt herself again. After 30+ years of injuring myself, I knew how to recognize the signs of a sprain:

And so I went to sleep with plans to visit the doctor the next day. I’m pretty confident they love me over there. This was the first time my doc saw my hair, and she was all open-mouth WOAH, but not actually surprised, since she’s been seeing me for years (basically since I got a job with health insurance). After I told her about trying to train my dog to jump over an ottoman by showing instead of telling (I mean, COME ON. How do you tell a dog to jump over an ottoman?), she laughed and told me, “At least you have a good story.”

“Doc, that’s pretty much my life. You should hear about the last time I sprained my knee…”

She laughed, and I made a few more jokes before she told me to chill out, rest my shit, and try not to reinjure myself like a fool (which is of course going to be tricky with several hours of improv classes and a show tonight (SHAMELESS PLUG: GO SEE MY ENSEMBLE, HAMMOCK FIRE, at the Chicago Second City Training Center Thursday nights through September 20!)

And so, I’m back on the injury train. Which is kind of funny, since I had finally stopped telling people that injuring myself is a key theme in my storytelling style.