I apologize profusely for skipping out on Fiction last week. Things were a little on the crazy side, so I thought something fun and lighthearted would be appreciated in the spirit of creative writing.

In case you don’t remember, I’ve been writing fiction since January, with the Fearless Fiction Femmes Fatales, and each week, we’re given a prompt. The last two pieces I wrote were for Project Fairy Tale, and so they were two parts of my own Rumpelstiltskin story. Prior to that, I had been weaving a web of drama with Jack and Mel and Claire. These are short blurbs of fiction, so if you’d like to catch up, I’ve listed the pieces below.

Giddy. That was the only way that she could describe her feelings when she was around him.  At first. Ben was a breath of fresh air after a long hot drought. He was smart, funny, and incredibly gorgeous. Mel could barely remember how it started. She just knew that she was glad it had. Their relationship had progressed rapidly. After a series of non-dates, they became inseparable. She knew that this was it. He was the guy.

They weren’t living together, but he spent 5-6 nights a week in her apartment on Lake Avenue. He had certainly marked his territory. She looked around the bedroom, noting some of his clothes hanging in her closet, his toothbrush peeking on the sink peeking out the bathroom door, his guitar on the chaise by the window, and finally landed her gaze on him, asleep in her bed. Yep, he’s definitely made his mark. She leaned down and kissed his sleeping forehead. I think he loves me.

Mel sat in her living room, waiting for Ben. He had said he was closing his restaurant, but he would stop by to see her after. At midnight, she started to get that panicky feeling. Why hasn’t he called? The restaurant closed at 10. He should be here by now. She glared at the clock as the minutes ticked by. The background noise of the TV could not distract her from the wandering thoughts.

He used to bring me flowers. He used to compliment me and tell me I was beautiful. We used to go out… He used to call me when he would be just a few minutes late. Now he’s…

She started to think about it and scolded herself internally, You’re beyond that part of a relationship, MEL. This is what happens. It’s not as magical. It’s life. Life’s not a fucking fairy tale. He’ll bring you flowers for special occasions, just not to “woo” you. He’s already got you. You’re his.

Right. Right. She tried to agree with herself, but she just kept wondering, what if he wants to leave me? What if he’s cheating on me? What if something happens?

MELANIE JANE MCDANIELS. She screamed at the thoughts deep in her mind. Relax. You always over-analyze EVERYTHING. It’s because you love him. You’re afraid that if you love him, he’ll leave you. RE-fucking-LAX. Do you want to live alone for the rest of your life? No friends. No love. Completely alone? Maybe a few cats? Just go with it.

Mel texted him, asking what his ETA was. 20 minutes later, he responded, “I’m on my way, Cupcake.” Her heart lifted. She knew it was silly, but she loved that he called her, Cupcake. The way it rolled off his tongue made her melt, and even though it was a text, Mel could hear the sound of it in her mind. She stared at the phone, then at the clock, then the door. He’ll be here. He loves me too. It’ll be great.

I don’t want to be alone. I don’t want to start over. I love him. I love Ben. I do. And he loves me. Mel’s thoughts were starting to sound less and less convincing, even to herself. He loves me. I’ll never find someone else who loves me like Ben does.

The internal argument began again, But does he really love you? You work a few blocks away from each other. You live in the same city. And yet, you only see him a couple nights a week?

We’re both busy. We have restaurants to run. He texts me. He calls me. We talk.

“Stop it!” She found herself yelling out loud, her assistant manager staring at her blankly. Suddenly, she was back at work, cell phone in hand, staring at it.

Jessica looked at her strangely. “Maybe you should go splash some cool water on your face. You look like you’re about to cry.” Jess was the closest thing she had to a friend here, other than Ben. But she was her employee…so Mel had trouble confiding in her.

“Thanks, I think I will.” Mel made her way to the bathroom and looked in the mirror. Black splotches under her reddened eyes. She barely recognized herself. She turned the faucet on and pushed the cool water into her face. Draining. Ben is draining me. Maybe I should…

No. Stop. He loves you. You love him. You do. Remember what dating was like? You’re never going to find someone like Ben. You understand him. He loves that about you. He’s handsome and smart. The other day, remember? Oh! What did he do? It was so funny. He makes you laugh. He makes you happy.

Yeah, when he’s around. If only he would just…call me. I just need to see him. That’s it. It’ll all be okay if I just see him. Maybe he’ll come over tonight. Jess is closing the restaurant, so I can go home…shower…get ready…maybe I’ll surprise him.

Keep telling yourself that. See where it gets you. Maybe you should go buy the first cat now. After drying her face, she looked at herself once more in the mirror. She put on a big fake smile, and walked out the bathroom door.

When she returned to the hostess stand, her phone vibrated. She pulled it out of her pocket and looked at the incoming text. “Sneak away with me for dinner, Cupcake?” A smile spread across her face. See, self, he still loves me. 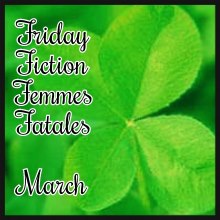 Now go on and check out my partners in crime, the Fearless Fiction Femmes Fatales. Some are writing fiction this week. Some are taking a break. But all are worth your time. Go visit their blogs! And PLEASE take a moment to visit DeBie Hive, because she’s posting about cutting her hair off for cancer. And as we all know, cancer sucks.

Stuck in a Rut
March is green, but winter still comprises 2/3 of the month. Spring is not until the tail end. So this prompt ensures our character is stuck in a (metaphorical or literal, you decide) muddy rut: frozen in a place that despite all his/her inner urgings, s/he can’t move forward or look backward.
Why?

Shameless Plug: Please go and vote for the Bloggies (fancy People’s Choice Style Blog Awards)! I’m a finalist (Along with my blog friends, Katie from Words for Worms, Joules from Pocketful of Joules, and April from First Time Mom and Dad).