And This is How Many Times I Injured Myself This Weekend… 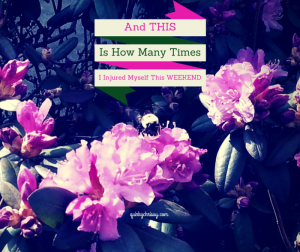 On Saturday morning, I attempted to finish clearing the dead crap from my heavily landscaped yard, a task I had begun upon arriving home the night before (while wearing a damn dress, no less). Dirt, mud and pollen threatened to swallow my hands whole. The purple paint on my freshly manicured, middle fingernail chipped. A light scratch here, a plant-burn there. Is plant burn a thing? Because it should be. Similar to rug burn, only from pulling dead grasses, plants and other things from your garden/lawn. I had zero desire to rip up the rest of my hands.

At the hardware store, after eating a bag of free popcorn and grabbing a pair of gloves to protect my accident-prone hands, I found a single package with three cutting tools nestled under a plastic cover, attached to a cardboard back with staples. What a convenient little set for cutting. I have plans to cut more things today. THIS. Is what I need.

I stood patiently, waiting for my turn at the register, and as I dug through my purse hunting for my debit card (yeah, I’m the annoying bitch with the purse full of receipts and other shit I don’t need, while my debit card lies somewhere near the bottom…), I remembered throwing that fucker in my shopping bag at the farmer’s market earlier that morning. Panic set in as the cashier began ringing my stuff up. Balls! I don’t have any money to pay for this shit.

Like an asshole, I mumbled apologies, asking the cashier to PLEASE hold my purchase for 20 minutes as I went home to find my card. I retraced my steps, and tried to remember what I had done with my card, and if it was, in fact, still in my grocery bag. Once inside my car, I realized that the card was actually in the pocket of my sweatshirt, and returned to the store less than a minute later, with red cheeks and a sheepish grin. I feared they thought I was lying.

When I left the store, my arms were full of items I needed and didn’t need all at the same time. I stacked them in the car, and continued on my original mission. I walked with purpose to the backyard of my parents’ house, where a pair of green Adirondacks and matching footstools awaited my rescue. They were battered from several cold winters and bright summers spent outdoors, and so I wiped them down before trying to maneuver them into my car.

After they were cleaned (and I use the term “cleaned” loosely as the abandoned spider egg sacs were removed and the thick coat of dirt and leaves became a thin layer of dusty grime that was going to take more than a quick wipe down to eradicate), I awkwardly carried the first chair to my car. The uneven weight distributed uncomfortably in my arms as I knocked into each bush and tree branch along the path.

My first attempt was to slide the chair into the backseat of my Yaris, but the width of the chair in any direction was too much for my tiny back door. After unsuccessfully trying to push the Adirondack into the trunk, I only had one other option. I opened the passenger door and began bargaining with the car and the chair, promising car washes and a new home respectively.

After a few minutes, I was able to ease the chair into the front, with the back of the seat leaning as far down as possible and the Adirondack appeared massive in my subcompact sedan. And then it was time to repeat the process. I pushed and tugged and arranged the two chairs so that I could just barely make my way home in the car. Each time I shifted gears, I had to lift the chairs to move the handle. I was forced to sit on the left side of my own seat with the chairs digging into my right arm, as I held the seatbelt across my body with my right hand. Thank God my parents only live a few minutes from my house. I prayed every second of those several minutes that a cop didn’t pull me over. 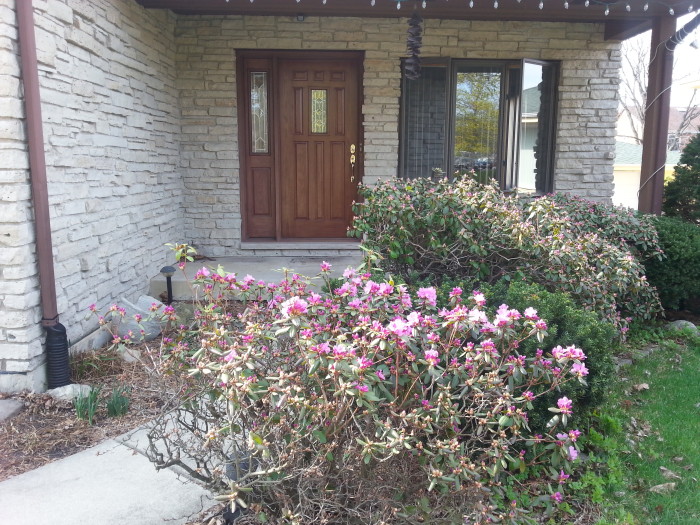 As I pulled into the driveway, I admired the blooming bushes and flowers that spotted our front yard and made me wish I had inherited my mother’s green thumb instead of a clumsy, fall-over-everything, try-desperately-to-keep-plants-alive disposition. I removed the chairs with little effort, carting them to the backyard, one at a time.

I prepared to resume my original mission to clean up last season’s dried stems and grasses to make way for the budding greenery in our yard. As I pulled out the gloves, I noticed they were attached to their packaging with a staple. I tried, unsuccessfully to remove it with my thumbnail, puncturing a small corner of the once-perfectly polished digit.

In an effort to preserve the rest of my fingers, I looked around for something to remove the fucking staple. The package of clippers and sheers seemed the logical (and laziest) way to solve my problem. As I attempted to delicately – wait for it – pry the staples off the plastic and cardboard packaging, I felt the sharp sting of my finger receiving yet another gash from a single staple. That motherfucker bit me.

Fuck that shit. I ripped the packaging to shreds with Hulk force, feeling the quick whip of a rogue staple whiz past my left ear on its way to the other side of the garage. At that point, all I could think was Welp. That could have been worse.

Once unlocked from the 27 staples, the small clippers acted as a pair of pliers to remove the remaining fucking staples that were causing so much agony. Who the fuck thought it would be fun and/or intelligent to staple plastic gloves together?

Once the seemingly harmless task of unpackaging my new garden toys was finished, I made my way to the bathroom in search of Disney BandAids and Neosporin. I dressed my wound, and gloved my hand so I could finally work on the beautification of our yard.

Several hours after clipping and shearing and pulling and tugging, I was just about finished. I heard the rustle of someone behind me, and I knew that Brian was actually awake.

Later that night, I felt intense bolts of pain shooting from my wrist when I rotated or pressed on it in certain ways. The pulling and tugging and throwing of the fucking dead grasses and shit was apparently a little rough on my arthritic wrists (which have actually built up a lot of strength thanks to yoga – alas, I’m not invincible). So I couldn’t hold my phone to fuck around on Facebook during the hour drive home from the North Side.

So by Sunday, my fingers were cut up, my nails were broken, my wrist was strained or something…and I’m not done yet.

A friend stopped by to donate a futon to our guest bedroom, and I went outside to help carry the pieces in. As we walked, three of us carrying the large mattress not unlike my awkward carting of Adirondack chairs the day before…when I tripped over my own bare toe. Why I thought carrying shit barefoot was a good idea ever at all…I’ll never know. But the image of the dirt-covered, bleeding, very large gash of lifted skin from the top of my toe with a giant flap where my toenail met the toe was nothing compared to the searing pain I’ve been in since it happened. My nail is pretty much digging into the raw cut, and I’m terrified of going near it with clippers, as the entire fucking toe is throbbing with pain. I figure I’ll be walking with a limp until June. So much for that spring pedi I was planning on getting myself.

Blog Friends, what gardening/landscaping woes have you encountered this spring? Any recent injuries or mishaps? Got any tips for me so I don’t kill everything in our yard before we’ve been in our house a year? Am I the only one who finds staples to be among the most dangerous of packing materials?