I’m Listening to Your Conversations and Writing Down Your Words

One of my favorite pastimes is people watching. It began as a simple pleasure.

Dining alone at a restaurant allowed me to play games in which I guessed everything about you, from your relationship status to the reason you ordered the salad or the steak. I’d watch carefully as you tucked that strand of hair behind your ear 15 times or as you hugged your girlfriend, wife, mother, child goodbye at the door. I’d create a story about you in my head that made sense. Sometimes it was a funny story, and sometimes it was sad. But it always felt real.

Sometimes, I’d pen a few words in a notebook as I watched you. Write your story down, to remember it. To change it and tell it later. Maybe you’d be the hero in my future fiction best seller. Or the villain in a screenplay I’ll write one day.

And then something changed. I started carrying this mini computer everywhere. I got lost in Facebook. Twitter. Instagram. Snapchat. Blogging. E-mails. Everything but what truly surrounded me. Scrolling through an endless stream of what people I “know” are up to. What they’re eating. Where they’re vacationing. When they go to work. How they go to work. I discovered I could people watch without watching anyone. I could see their lives unfold without being anywhere near them. I didn’t need to make up a story, because it was all right there on my screen.

Instead of watching you argue with the cashier at LOFT about a coupon, I was staring down at my phone in a trance. Watching them talk about their most recent Amazon purchase or what their kids ate for breakfast. Laughing about a meme that everyone was sharing.

Once in a while, I’m reminded of you. Your screaming is so loud, I’m drawn back into the real world. I see you. I hear you. And everything you say is absolute gold. And now, with this tiny computer, I can capture it. Whether I’m recording you on Snapchat like an asshole (I’m the asshole, not you) or sending myself your words for posterity in an email, I’m there. Listening to everything you say. I promise. 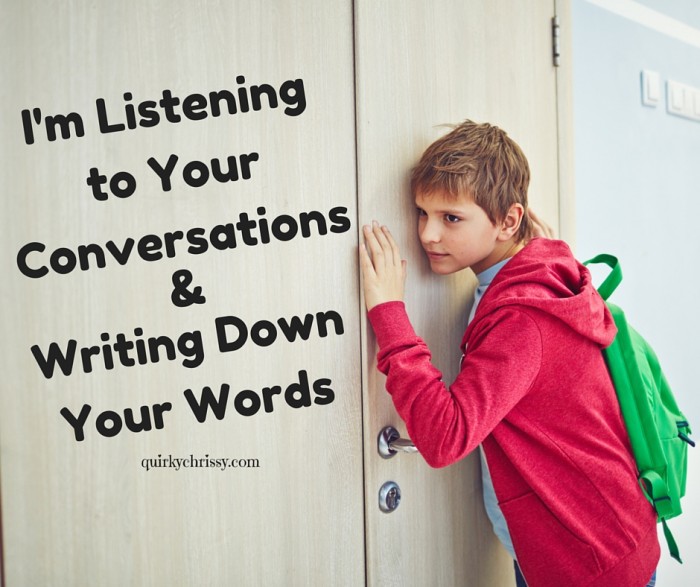 In case you don’t believe me, here are some of my favorite things you’ve said.

Middle Schoolers on an air plane trip to Washington DC

“I feel bad for all these people.”

To be fair, we were warned that it was a full plane and the back half of the plane was going to fill up with tweens.

Technically, it’s $8 for the whole Internet, but you know…tomato, tomahto.

I’m assuming you’re in 8th grade, and it’s probably not going to work out for you, my friend.

Lady on the train without a ticket

I feel really sorry for you, lady, even though you’re lying…at least about Al Capone. But I also feel sorry for the women to whom you passed your coffee cup. We shared a sympathetic look as she set your coffee cup on the floor while you went to take a crap in the train bathroom.

“What is she Croatian? Is she Romanian? I know she’s not Greek, ’cause I insulted the Greeks in a meeting and she didn’t flinch.”

Oh boy, gentleman. Your deep Chicago accents are making this way more entertaining than it should be.

You sound so flip. At least train lady was obviously distressed.

“Just like that guy who got his arm stuck in a boulder and had to cut it off.”

You guys are a train wreck. Please don’t leave. I want to listen to you for hours.

What juicy conversations have you overheard in your world? What are your favorite people-watching places?