I grew up in a bar. I don’t say this to shock you; I say this because it’s true. And it’s not a bad thing.

Every summer, Tuesday nights were exciting because my brother and I would pick up cheeseburgers and kiddie cocktails on our way to Dad’s softball games. We’d snack out of Styrofoam containers while Dad threw killer pitches. Then we’d get bored and run off to the playground next to the field.

After the game, we’d head back to the bar where Mom was occasionally serving drinks and Dad was celebrating with the team. The other bar kids and I would jam out to 80’s hair metal on the juke box, hustle grown-ups at pool, race around the back alley, and convince bar patrons to steal a grocery cart from the store across the street. Sometimes, we’d even walk a couple blocks to get Blizzards from DQ or candy and cheap toys from the local drug store. And you know what? My brother and I – we weren’t stupid. We knew what alcohol was. We saw a lot of alcoholics come and go from that bar.

So when one of us would ask, “Can I try?” and our parents said yes, they weren’t stupid either. Before you get all Trolly McTrollerson on me or my amazing parents, let me inform you that the Illinois State Liquor law does not have an age restriction for parents allowing their children alcohol in the safety of their own home. Which was the only place we were allowed to try our parents beverages.

My brother and I tried our fair share of Bud Light tastes and the occasional sip of cognac, and every time we tried something, we would spit it out with a resounding “YUCK.” Because gross. Our child palates weren’t down with alcohol, and we couldn’t understand how on God’s green earth our parents could consume such slop. Give me a 7up and grenadine any day.

Even I, as a young pup, would make my fair share of alcohol jokes. When my sister, Deven, was away at college, she teasingly promised a nine-year old Chrissy that when I came to visit her, she would take me to a party and give me beer. I firmly stated to her, “I prefer cocktails.”

Of course, I was talking about kiddie cocktails, but everyone laughed. I got my sense of humor from my parents. Thank God.

Because right now, Responsibility.org is asking mom bloggers to “refresh their funny” and remove alcohol-related humor from their repertoire. You can watch this video that shows their preferred messaging.

While I’m not a mom blogger or even a mom, I’ve got a few things to say about this.

I respect the Talk Early campaign. I’m all for talking to kids about alcohol. Hands down, talk about it. But you know what? Alcohol is a legal substance for people over the age of 21 in the United States. It’s often younger if you live in another country. Parents aren’t going to stop drinking on behalf of their children, so why should they kill their senses of humor on behalf of those same children?

I’ve heard that parenthood changes you, but I sure as fuck hope that when I have tiny humans, I don’t lose the ability to make a quick joke about vodka. Because…Chrissy Water, as my friends call it here in the Chicago suburbs, isn’t going anywhere. 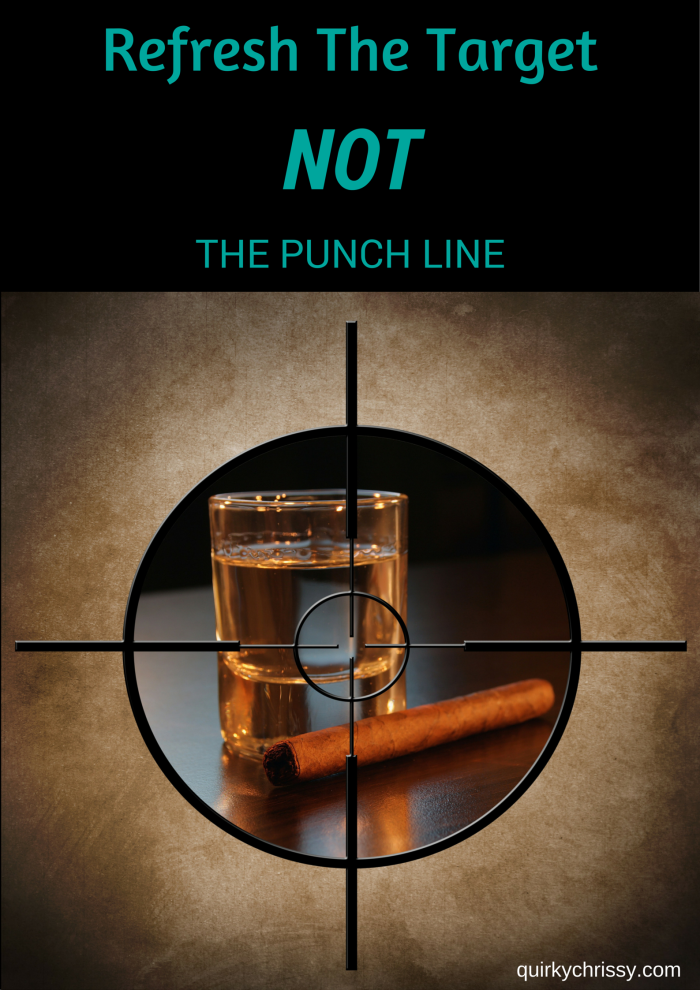 Me? I waited until I was a respectable freshman in college, sneaking booze the proper way. By getting a junior to buy my Boone’s Farm.

Responsibility wants to start a conversation. They’re even offering a fancy monetary prize to three BlogU15 bloggers who write about Refreshing Their Funny. This post is an entry into that contest, and no one paid me to say anything in this piece. Especially considering my whole disagreeing with them thing.

What about you guys? Do you believe parents should stop posting images and jokes with alcohol as the punch line? What are some of your favorite jokes and memes? When did you start drinking?