I’ve spent the morning reading about what a bullshit thing it was for People to put Blake Shelton on the cover of People Magazine for Sexiest Man Alive and that people are up in arms about it. Personally, I stopped giving a fuck what People Magazine thought about men when — nope. I’m not even playing. I’ve never cared about the Sexiest Man Alive. If Colin Firth and Jeff Goldblum aren’t on that list, it clearly hasn’t adequately captured the heart of sexy. Ever. 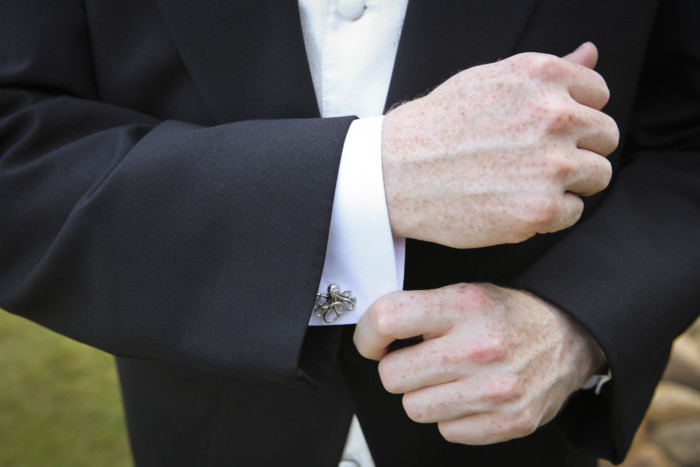 So I decided I’d start my own Sexiest Man Alive award. And the inaugural recipient is, obviously. Brian. But don’t just let me tell you he’s the sexiest man alive. Here are just a few of the things that make him so dang irresistible.

He’s got a soft spot for watching TV with me

And he’ll even watch some things that many husbands/boyfriends/partners would typically opt out of. Not only is he watching The Handmaid’s Tale with me, but he also watched Gilmore Girls. I’m not saying he binged the entire thing in 3 weeks like I did, but he would sit down and watch an episode here and there. I’m also pretty confident he was Team Logan too.

Even if he doesn’t know the correct pan to use for boiling hot dogs.

The boyfriend just informed me that we have a frozen pizza and he will deliver it to my couch. That’s why I’m going to marry him.

We all know that I’m the cook in this relationship. He sends me gifs of things like ice cream sandwich cakes and Cheetos mozzarella sticks, and then I make them. But sometimes, he’ll throw together one of the things he knows how to prepare and he’ll hand deliver it to me like the sexy AF gentleman that he is.

He’s got a keen fashion sense

Our wedding is in 2 weeks, and my future husband says to me, “Did you know you’re not supposed to wear white after Labor Day?” 😂😂😂

And he was ready to go toe to toe with anyone who fought me on my wedding shoes.

I suppose I shouldn’t complain that my boyfriend is running the vacuum at midnight, right?

He meets me halfway, even when I’m halfway across the country

When you forget you’re in a swanky hotel on a business trip and you start a who can yell louder contest with your husband via video chat.

I’m pretty sure the only people who lost that contest were the ones in the rooms on either side of mine. Did I mention I was on the executive floor?

He’s a poet and he doesn’t even know it

Me: No more rhyming. I mean it!
Boyfriend : I don’t wanna watch that movie. I’ve already seen it.

He takes care of me when I’m sick

Husband just went to the store to get me nose strips. I don’t know if there’s anything sexier than that. Except, maybe, nose strips.

He’s smart, funny, and he keeps me on my toes. He’s got science guy and gentleman wrapped up with a bow. You know, now that I think about it…Brian is pretty much an amalgamation of Colin Firth and Jeff Goldblum. He really is the sexiest man on earth. [I really tried to squeeze in a joke about Earth girls being easy, but I just umm…couldn’t…well…find a way.]

Really, though, with all of the big-name men being called out for assault, harassment, and more, maybe we should stop putting the people we see in movies and on TV on pedestals. Maybe we should think about how to make the world a better, safer place. And I think a lot of that starts at home. So can we all stop worrying about the guy a bunch of editors at a weekly publication determined was the sexiest man alive and focus on the ones we know in the real world?