That One Time My Life Was Like Breaking Bad

You guys. You will not BELIEVE what happened. I FINALLY got permission to write about this little sitch-something about statute of limitations or something? So, a friend of mine owns a rental condo. A sweet little condo in a quiet little suburb. And the most recent tenants left in quite a hurry. We’re talking furniture, clothes, garbage all up in that place. It was a disaster. Broke their lease and rolled the fuck out. Leaving a few new additions to the place as well (read: almost all of their earthly possessions were left behind)…including a wall safe, a full-on security system, an extra fan in the kitchen, and a gun locker.

Of course this was just a little bit of educated guessing…

Well, my brother and I helped with the final clear out after our pal had spent hours and hours cleaning this place up. All that remained by the time we showed up were a few pieces of furniture and the gun locker.

Somehow, this large gun safe made it to the outside of my family’s home (and by somehow, I mean we loaded it in a truck and carted it to my parents’ place)…because, you know…visions of random DIY shit danced in my head…until I noticed that the gun locker had a key broken off inside of it.

Someone broke that key off on purpose.

Curiosity, it appears, runs in my family. Little Brother decided that it was absolutely necessary to get this locker opened. So he grabbed a hammer and a flathead screwdriver and went to work. Of course, at this point, my dad came out and saw what was going down…he looked at my brother’s efforts, and his response was something along the lines of a laugh and, “No, son, you’re doing it wrong.”

Dad walked to the garage and grabbed a crowbar. I didn’t even know we HAD a crowbar. I almost thought for a second that he was going to go in for the kill, but then he handed the crowbar off to my brother in some primitive man-to-son thing. My brother got back to work while the fam looked on in wonder? Curiosity? Fear? Excitement? One of these, I’m sure of it. And within minutes, we’d broken into the gun locker. Recap: if you want to break into a gun locker, lay it on its side, get a crowbar and pop that bitch open.

Inside the abandoned gun locker with a key broken off in the lock we found all sorts of crazy shit.

Aside from the visible golf tees(someone explain this to me. Is this a drug thing? My only real experience with the drugs was with The Drug Addict. Googlepedia only told me that drug addicts play golf), most of it was packed into grocery bags. Some of us less-than-wisely decided to reach in and see what was in the bags…

Of course, being a gun safe, there was all sorts of ammo for Winchester rifles and God only knows what else inside, including a giant fucking bullet or shell or whatever you call it…

Inside some of the bags, on first look, was garbage…but upon further investigation, we discovered used(?) hypodermic needles and melted/burned/cut-in-half pop cans (apparently, this is common drug paraphernalia for crack cocaine? Thanks, Google) and a bottle of methadone (cooking crystal meth, were they?). 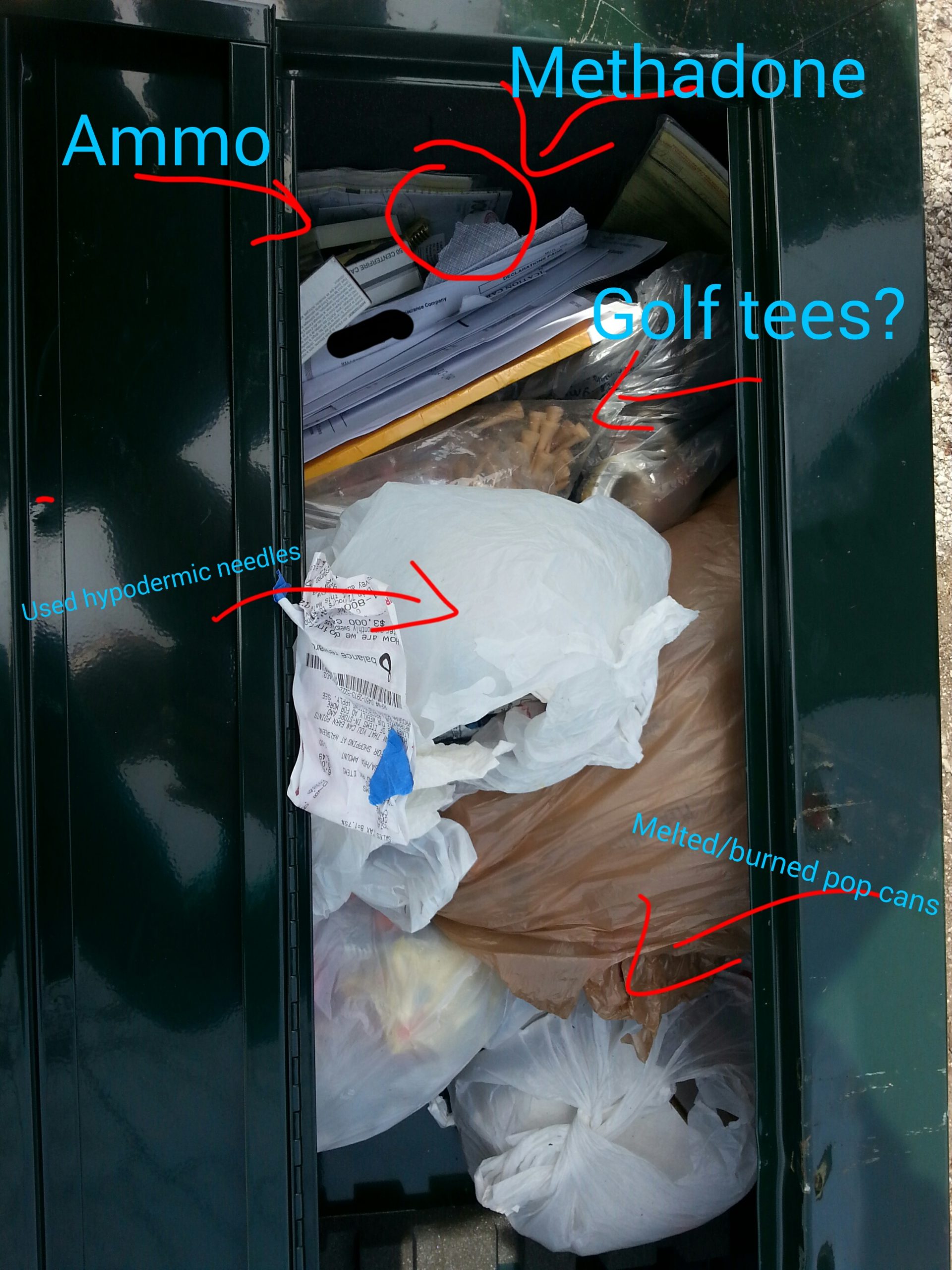 At this point, we called our friend to explain that we had popped the safe open, discovered a world of not-so-awesome shit and maybe we should call the police. Our buddy came over, assessed the situation, took the gun case back to the condo…and tossed it in the dumpster near the unit.

Terrifying visions of retaliation from crazy drug lords danced in our heads…getting rid of it in the quickest and dirtiest way seemed like the least likely route to get killed.

For the record, the police WERE notified…and while my friend offered to show them the dumpster full of used drug paraphernalia and ammo, they said it was no big deal. This is not the outcome any of us expected, but when the popo say it’s all good, it’s all good, amiright?

Blog Friends, what’s the craziest thing that’s randomly happened to you? What would you have done in this sitch?