The Crimson Thread or How Rumpelstiltskin Became the Good Guy

As a part of Project Fairytale, hosted by The Cheap Reader, I’m supposed to do some book reviews of Rumpelstiltskin re-tellings. I picked up this young adult novel for my Nook. The Crimson Thread by Suzanne Weyn. In a premature excitement, I may or may not have collected several of the tales from this “Once Upon a Time” series. Not to be confused by the ABC TV show of the same name. 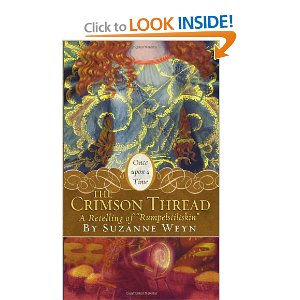 Maybe I got a little ahead of myself, because I was not inspired to read the rest of the books in the series. It’s not that it was a bad novel. It just wasn’t delicious enough to warrant another serving.

The Crimson Thread takes us back to 1880, where an Irish princess is introduced to us by some royal fairies or something. It wasn’t very clear. But apparently she always thought she was a princess, and it turns out that she was, but it never really did anything for her. It was a side plot that didn’t add, rather detracted from the tale.

Back to the Irish princess, Bridget, who upon coming to America changes her name to Bertie Miller (Bertrille Miller, from Wales, like the fire red hair and Irish accent wouldn’t give her away…) She is helped by Ray Stalls, who turns out to be Rudy Stilchen from Germany or something-it’s never really clarified. He used gold packing material and this stunning thread to embroider dresses and help her get the young millionaire’s son. Of course, he does it because he loves her and not because he ACTUALLY wants her first born child.

Eventually the millionaire’s son turns out to be a douche, leaves her stranded and broke…then Ray shows up somehow and “kidnaps” her little sister while she passes out from starvation. But he was only trying to help. They fall in love and live happily ever after, running a clothing business with their business partner with the last name Rumpole. Get it? Rumpole Stilchen. Ugh.

So it had an okay plot, but with so many holes and weird transitions, I found myself mostly annoyed. I get that it was written for young adults. The language was too trite. While Weyn has an excellent vocabulary, or uses a whole lot of shift+F7, the conversational tone of the book was far too formal, and I didn’t find myself relating to the characters at all.

Additionally, it seemed that the historical fiction aspect of this novel was way the F off. It’s like she just threw a bunch of ideas out there and didn’t really think about the details fitting in. Katie at Words for Worms recently spoke about accuracy in the research before publishing, and it really feels like Ms. Weyn left that part out. It didn’t feel real.

So I’m off to attempt another re-telling and hopefully the next gets me a little more hyped, because so far, I’m a little disappointed. But it only makes me want to write more fairy tales.